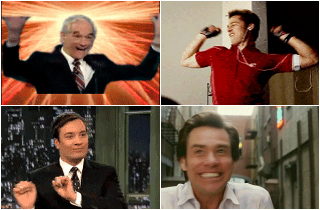 The Energy and Commerce Committee, run by long-serving Republican Representative Fred Upton and Tennessee Republican Marsha Blackburn, put out a press release on Thursday that maaaaaaybe went a li’l overboard on the GIFs.

Entitled “The Roller Coaster of Emotions on the Path to Build the Keystone XL Pipeline”—that mixed metaphor is the least of its problems—the press release was issued on the fifth anniversary of the Keystone project’s first application to the State Department. It recounts the pipeline’s totally not-controversial history (were in not for that blasted Obama), with Jim Carrey, Jimmy Fallon, that dude who’s not the main dude from Napoleon Dynamite, and more, all leaping and dancing and mugging to embody the excitement the reader should be feeling when studies proclaim the pipeline’s allegedly narrow environmental impacts or something:

On September 19, 2008, five years ago, when TransCanada first submitted its application to the U.S. State Department to build the Keystone XL pipeline, a $7 billion private infrastructure project that would create thousands of jobs and advance America’s energy security:

In October 2010, when then-Secretary of State Hillary Clinton was asked about approval of the pipeline in 2010 and she said, “We are inclined to do so”:

Hey, it’s like that webpage Homer Simpson made! (“You think all the noises would be annoying, but they’re not.”)

And then there’s this weird one about Nebraska Governor Dave Heineman but featuring Ron Paul for some reason:

In January 2013, when Nebraska Governor Dave Heineman approved TransCanada’s proposed reroute of the pipeline through the Cornhusker State: