‘This Loss Was Mostly on Odell, Capt. of the Yacht Club’: Check out the Hottest Beckham Jr. Takes

‘This Loss Was Mostly on Odell, Capt. of the Yacht Club’: Check out the Hottest Beckham Jr. Takes 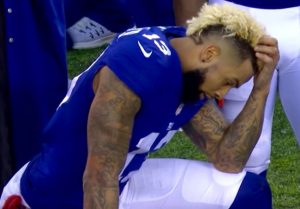 From the moment he dropped what would’ve been a touchdown pass in the first half of Sunday’s playoff game against Green Bay, New York Giants wide receiver Odell Beckham Jr. was certain to be the target of many #hottakes from sports pundits across America.

That’s because Beckham and three of his fellow receivers (including Sterling Shepard, who also dropped a sure-thing touchdown pass), spent the Giants’ off day this past Monday down in Miami partying with the likes of of Justin Bieber and Trey Songz — first in a nightclub and then on a boat.

So whether or not the impromptu trip south actually impacted his play, it gave his critics ammunition with which to attack him if he didn’t play to his usual high standard. And indeed, the takes came fast and furiously on Twitter as Beckham dropped three crucial passes.

Did you see Odell drop an easy touchdown and an easy (and key) third down conversion? Oh yeah, his head was totally in the game! https://t.co/Nwr2AMSioe

If you want to be what Odell wants to be, you cannot no show the biggest game of the year. Boat or no boat. #Giants

This loss was mostly on Odell, capt. of the Yacht Club. Switched my pick to GB because that trip sent such a bad message to teammates and GB

@JasonLaCanfora how about he runs thru the throw and makes a simple catch ? #showBOAT

@RealSkipBayless Odell is one of the best receivers in the league. But he is a crybaby who needs to get off the boat and practice

Miami boat trip had no bearing on NYG loss. BUT it gave people ammo to blame Odell if they lost & he played badly. He doesn’t “get it.”

Beckham was not without his defenders on social media:

Yeah, Odell Beckham the WRs went to Miami and forgot to catch a ball. Sure, let’s run with that narrative.

I’m convinced Joe Buck mad he wasn’t on the trip to Miami gotta be the only reason he keep bringing it up ?

So a guy goes to Miami for one day and that makes him forget how to catch? Someone’s hair plugs are growing into his brain.

If Eli had been on that damn yacht like he shoulda been, with no shirt on, then OBJ catches that ball.

Others were more concerned with what Beckham reportedly did after the game, when he was said to have punched a hole in the wall near the Giants’ locker room.

Odell Beckham apparently punched this hole in the wall outside the Giants locker room. pic.twitter.com/Y6ufQ63hbF

odell acting a fool after losing to me is way more problematic than any boat trip. he seriously has to get that under control.

My two cents: Odell Beckham Jr shouldn’t be a role model for anybody’s kids until he’s ready to start acting like one on and off the field.

Odell Beckham did more damage to wall in hallway near Giants locker room after game than he did to Packers’ defense. pic.twitter.com/YWNDy4wZbo

As for Beckham himself, in comments reported by Yahoo!, the receiver stood firm that his jaunt south was not the reason he had a subpar game.

“There’s no way you can connect something that happened seven days ago to today,” Beckham said. “That’s not realistic. The connection is not there, in my opinion. But everyone is going to have their own opinion.”