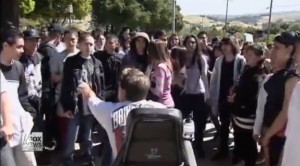 On Wednesdsay, five California high school students were sent home from school when they were asked to remove their American flag shirts, out of respect for Cinco de Mayo, and refused. The following day, many students staged a mass walkout to attend a rally protesting the fact that the 5 students weren’t punished more harshly.

The story got national news attention, but gratifyingly doesn’t seem to have caught on with many people (beyond Roger Ebert). Still, there are some surreal elements to this story that deserve closer inspection.

Before I get started, though, I have to mention that, as I was Googling articles for this piece, I inadvertently discovered that there are a lot of instructions on the internet about turning an “ordinary t-shirt” into a halter top/tube top/other sexy top. Allow me to simplify this process for you. Step 1: put on t-shirt. Step 2: hand scissors to random dude and hold still.

But, I digress. Here’s what happened at Morgan Hill’s Live Oak School, according to local NBC reporter George Kiriyama:

Galli says he and his friends were sitting at a table during brunch break when the vice principal asked two of the boys to remove American flag bandannas that they wearing on their heads and for the others to turn their American flag T-shirts inside out. When they refused, the boys were ordered to go to the principal’s office.

Hold on. Brunch break? Really? What kind of school is this? Are there dedicated “nooks” for this purpose? Sorry, I digress again.

“They said we could wear it on any other day,” Daniel Galli said, “but today is sensitive to Mexican-Americans because it’s supposed to be their holiday so we were not allowed to wear it today.”

The boys said the administrators called their T-shirts “incendiary” that would lead to fights on campus.

Film critic Roger Ebert took offense to the 5 kids’ patriotic display, tweeting that “Kids who wear American Flag t-shirts on 5 May should have to share a lunchroom table with those who wear a hammer and sickle on 4 July.”

Shockingly, to my knowledge, no conservative has yet replied that there’s no way such kids could get into the White House cafeteria (rim-shot).

Seriously, though, what school did Ebert attend where they served lunch on July 4?

In the context of Arizona’s immigration law, it’s not completely out of left field that Mexican-American students might feel a little bit defensive about the display. It sounds to me, though, like the kids were handling things just fine. According to the flag-wearing kids, they were approached by several Mexican-American students who asked them about their choice of apparel. Handled properly, this is exactly how the diversity that we pay lip service to is achieved, and new understanding arrived at.

Instead, the conformity-loving, path of least resistance-following school administrators stepped in and screwed everything up. To their credit, the school district has already thrown the principal under the bus, saying “The district does not concur with the Live Oak High School administration’s interpretation of either board or district policy related to these actions.”

Now, I don’t entirely buy the flag kids’ contention that they “didn’t mean anything by it.” It wasn’t just shirts, but bandanas and, in one case, shorts as well. It’s fair to argue that their display was directly related to Cinco de Mayo, but so what? If they had been marching in formation, with fife and drum, singing “America, F**k Yeah!” it would make no difference. This is America. They get to do that. 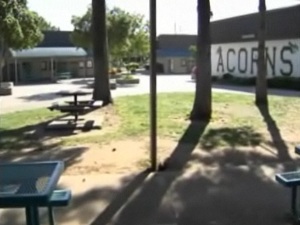 Another weird, non-sequitur aspect of this story is that the Live Oaks School’s sports team mascot is…the ACORN! Call Andrew Breitbart! Obama must somehow be pulling the vice-principal’s strings! To the Breitmobile!

The following day, Seis de Mayo, many of the school’s students staged a walkout to attend a rally at the Morgan Hill Civic Center to protest the fact that the flag-wearing kids weren’t punished more harshly!

The students rallied at the Morgan Hill Civic Center, calling the actions of the students who wore the shirts offensive, and demanding to speak with the mayor.

“I think they should apologize because it is a Mexican heritage day,” Annicia Nunez, a Live Oak High student, told NBC BayArea. “We don’t deserve to be disrespected like that. We wouldn’t do that on Fourth of July.”

Aside from the fact, again, that school’s not in session on 4th of July, how do either of these scenarios equal disrespect? I mean, a Confederate flag on Martin Luther King Day makes sense as an outrage, but this is more like wearing a Che Guevara shirt on St. Patrick’s Day. It ain’t green, but at least it’s not orange.

Ironically, it’s the kids who walked out to protest the lack of punishment who should be punished, since they’re the only ones who actually broke a rule. In the spirit of civil disobedience, I’m sure they’ll happily accept that. Given the recent demonization of Latinos emanating from Arizona (in addition to the “Show me your papers” law, Arizona has targeted teachers with accents and ethnic studies programs), perhaps Mexican-Americans can be forgiven some oversensitivity, but these protesters were pretty clearly wrong to ask for these boys to be punished. Once again, though, in America, they get to be wrong.

Here’s the strangest part of this story, for my money. A friend of mine fumed to me that he had seen video of the student protesters assaulting a guy in a wheelchair, which seemed like the kind of thing that would get a lot of attention. I tracked down the video, and it turns out the guy actually snatched a Mexican flag away from the protesters, and they snatched it right back. In a strange way, that almost seems like progress.