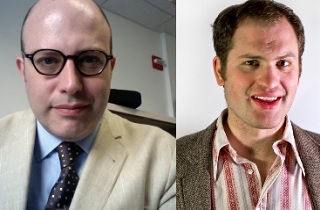 The online media world, particularly Twitter, has been infatuated with the recent feud between In These Times labor reporter Mike Elk and Daily Beast national security reporter Eli Lake, which has continued to escalate far beyond whatever conflict these two have with each other. Without getting into the tick-tock of the feud, the social media reaction to it has been grossly out of proportion, and possibly harmful to an IRL human being. It’s time for responsible voices to put the popcorn down and turn a cold hose on the dog-pile.

Mike Elk has a reputation for outspokenness, and Eli Lake is no shrinking violet either, so it is understandable that their quickly-escalating conflict would draw some attention. At this point, it’s a safe bet that both of these gentlemen would rather it hadn’t gone beyond that, and been settled between the two of them, but the attention surrounding their argument resulted in a Twitter hashtag that widely and roundly mocked Elk, a parody Twitter account that was promoted by a Buzzfeed reporter, a relentlessly derisive blog post revealing email exchanges, and multiple shots at Elk’s mental health status.

The purpose of this commentary is not to referee this dispute, or to shame the spectators, but to provide a little bit of context that might make a difference. Mike Elk has Asperger’s Syndrome, an Autism Spectrum Disorder, about which he has courageously written. Autism Spectrum Disorders are much-misunderstood neurological conditions that are frequently demonized in the media, and Mike has been a source for several of my stories on this issue. That is not to say that people with ASDs should not be treated equally, or be held responsible for what they say, but as Elk has pointed out on Twitter, they should not be attacked because of them.

Furthermore, if someone is attacked on the basis of a disability, others in positions of responsibility and influence have a duty to put a stop to it, even if they disagree with that person, or his method of response. This is particularly important here, because people with ASDs are especially vulnerable to the sort of overload that a dogpile like this can create. Here’s how Mike Elk described the condition in his “coming out” letter:

Asperger’s Syndrome is a condition in which an individual has an autism-like focus on one particular subject to the exclusion of everything else. People with Asperger’s tend to be so focused on a few things that they often miss social cues and seem distant or aloof. With Asperger’s Syndrome, happiness and pain are all-encompassing feelings to the exclusion of everything else, leading to extraordinary mood swings. People with Asperger’s syndrome comprise a group that ranges from people who are barely able to talk to those, like me, who just come off as slightly awkward and idiosyncratic.

Being a person with an ASD is, to my best understanding, a bit like being in a foreign land where you don’t speak the language, and they don’t speak yours, except that it isn’t just your verbal language that’s lost in translation, it is every one of your senses. That focus Mike describes is something that must be learned and re-learned constantly. I’m no expert, but it seems like that aspect of the condition my have colored Elk’s interactions with Lake, and his reactions to the ensuing siege. Left to their own devices, Elk and Lake might have resolved their argument, or simply gone their separate ways, but with the piling on of everyone on the internet, and the absence of cooler voices, this thing is completely out of control.

Whatever you think of Mike Elk’s role in this feud, he should not be ridiculed because of his condition. Furthermore, however this thing started, it is now a lopsided dog-pile that is disproportionately harmful to someone who can least defend himself. If it wasn’t bullying before, it is now, and it needs to stop.