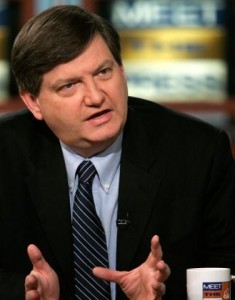 When James Risen‘s story about the bankable mineral deposits in Afghanistan ran in The New York Times on Monday, bloggers were quick to declare that something wasn’t quite right about the timing of the piece, calling the article a reiteration of previously known information in order to beef up support for the war effort in Afghanistan. Now, Risen is telling bloggers that he’s no mouthpiece for Big Brother – and that they should “do their own reporting instead of sitting around in their pajamas.”

In an “increasingly hostile” interview with Yahoo! News senior national reporter John Cook, Risen took on the critics in the blogosphere for questioning the intention of the Times story, even taking aim at Cook, who recently left Gawker to join Yahoo:

“‘Do you even know anything about me? Maybe you were still in school when I broke the NSA story, I don’t know. It was back when you were in kindergarten, I think.’ (Risen and fellow Times reporter Eric Lichtblau shared a 2006 Pulitzer Prize for their reporting on the Bush administration’s secret wiretapping program; this reporter was 33 years old at the time.)”

According to Cook, Risen called back immediately after the initial interview to apologize for his attacks on bloggers, saying he “was taken aback by some of the criticism, and didn’t sleep well last night, and was upset about it.”

The young, lazy, pajama-wearing bloggers cried foul when it became clear that knowledge of the mineral reserves was already available to the public, associating the release of the story with news that the war is not going as well as planned – a matter which General David Petraeus was supposed to testify on the day after the story ran.

Though the story was based on reports from Pentagon officials, Risen insisted in the interview that the Pentagon had not planted the article. Instead, he claims the idea was given to him by a friend who worked on the original surveying project of Afghanistan’s mineral resources (led by the Pentagon), and that it was newsworthy because “things were going so badly in Afghanistan that people would be willing to talk about this.”

As for the the “pajama” if you need further evidence of far behind certain members of the MSM are when it comes to the reality of the Internet, look no further.