Tom Friedman Solves Unemployment With ‘Sharing Economy’: Just Rent Out Everything You Own
column

Tom Friedman Solves Unemployment With ‘Sharing Economy’: Just Rent Out Everything You Own 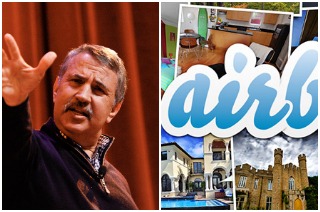 Not the service—Friedman’s New York Times salary more than provides for many a mint-pillowed hotel room—but the company itself. His rosy-eyed view of the start-up’s success has convinced him that those muscled out of the workforce should start charging hourly for everything, from cars to drills. It’s a zanily-depressing argument that more crystallizes the troubles of our economy than alleviates them.

Airbnb’s story, at least as Friedman tells it, is tailor-made for the proto-Times columnist, always discerning moral patterns in the miasma of capitalism. Friedman piously repeats Airbnb founder Brian Chesky’s tale of conjuring his company while trying to scrape up rent in San Francisco, after years of failing to find a steady job with health insurance. Chesky used his ingenuity—read here as a house that he couldn’t afford but could rent out—to build a company, and presto, he got his health insurance, just as his parents wanted. An inspiring narrative, at least if you’re not skeptical of it, which you should always be when a company’s CEO describes the easy raveling of his own genius.

Chesky, like many self-made heroes, now thinks his model of success is portable, and wants to know why everybody in the wide world doesn’t rub two sticks together and spark their possessions into business opportunities. All this paradigm needs is a catchy name, which Friedman, like his paper-mate David Brooks, specializes in. Behold the “sharing economy”:

In a world where, as I’ve argued, average is over—the skills required for any good job keep rising—a lot of people who might not be able to acquire those skills can still earn a good living now by building their own branded reputations, whether it is to rent their kids’ rooms, their cars or their power tools. “There are 80 million power drills in America that are used an average of 13 minutes,” says Chesky. “Does everyone really need their own drill?”

This doesn’t even really count as an “idea.” “What if we rented out our tools?” has more the ring of a desperate garage sale than it does any sort of viable income strategy, a last ditch effort to cobble together payments before the repo men come—either way, you’re out a power drill.

But even a successful iteration of this plan* reinforces the very economic paradoxes that necessitated it. Chesky invented his company after failing to secure a job with benefits, but his model turns everybody into a self-employer, without the (admittedly decreasing) guarantees that workplaces offer. Not having health insurance is a great way to find your back against the wall—especially for the type of older worker likely to be flailing in newer industries—thus replicating the very problem it was meant to ease. Making everybody their own, twenty-four hour independent contractor, a sort of 1099 of your entire life, increases the pressures that Friedman bemoans required the “sharing” solution in the first place.

Likewise, Airbnb’s convenience encourages the out-of-control housing markets to which it’s supposedly a response. I used Airbnb for a hot minute when I moved to New York City, but only because Gotham’s housing market long ago ceased to respond to rational economic incentives, making finding a cheap, non-binding place to stay a matter of urgency. (San Francisco might even be worse.) Housing markets aren’t supposed to operate like that, but Airbnb enables them to do so by picking up the slack, allowing housing costs to soar and forcing people to rent their living rooms to pay them.

This is a vicious circle. And it’s what Friedman misses while he stares starry-eyed at Chesky’s climb: Airbnb isn’t a solution to the bad economy. It is the bad economy.

* Which would look like what, exactly? “We rent our TV when we’re out of town, good luck hooking it up?” How are people who can’t master the skills of the new economy supposed to maneuver this process?