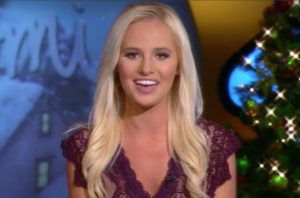 Conservative pundit Tomi Lahren took on critics today who are completely mystified by the idea that she’s capable of being friendly with people like Trevor Noah and Charlemagne Tha God.

After Lahren faced off against Noah on The Daily Show, TMZ covered the two of them when they went out for a dinner date later that night. Lahren used her show today to draw attention to this, particularly to the parts where TMZ’s commentators were surprised that she had a good conversation with Noah and that she’s not actually a “flame-throwing demon.”

“Yeah, imagine that. We had fundamental but civil disagreements, and we can still be friends,” Lahren said with obvious snark. She had a similar reaction over how TMZ covered her again while she walked through the city with Charlemagne from The Breakfast Club.

“Holy crap! Look at that! Now the hard left is having a fit because their alt-right depiction of me is not sticking,” Lahren said. “But they’ll do whatever they can to force it, including being downright racist themselves.”

Lahren and Noah previously defended each other online, though she did have some tough words in a “Final Thoughts” segment about hypocrisy and double standards in the media. But perhaps there is hope for unity after all:

When @trevornoah sends you cupcakes and you realize a mutual love of sugar might be the common ground you needed! #TeamTomi #thedailyshow #sweettooth #cupcakes #commonground