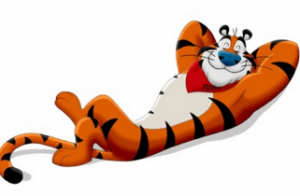 A few days ago, Kellogg’s started blocking furries left and right on their Frosted Flakes Twitter account, which struck some as pretty discriminatory. Some members of the furry community have been sending graphic messages to the cereal’s spokestiger for months now and the family-friendly company had had enough.

As far as tweets go, these started out pretty benign by typical teen or subculture standards. That is to say, though, that they were totally horrifying by the standards of the average American parent. References to advanced sex acts and “cummies” were abundant and Tony the Tiger became known almost exclusively as “Daddy,” much like Bernie Sanders and other prolific Twitter users before him. (If you don’t understand or get these references, don’t feel bad. Consider yourself lucky. As a digital native and decently-savvy Millennial culture connoisseur/creator, I do understand, and it gets pretty stressful.)

Things seem to have escalated, sadly, based on the blocking spree.

I don’t even think I’ve ever tweeted at @realtonytiger, did they just go and block all furries? XD pic.twitter.com/4U2OXme82Y

(Note: The person in the above tweet claims to never have tweeted at the sports-loving tiger, but a follower brought forth evidence that they had, in fact, once tweeted about wanting “smooches” from him. For your records, this is known as producing “receipts.”)

I’m all for showing your stripes, feathers, etc. But let’s keep things gr-r-reat – & family-friendly if you could. Cubs could be watching ?

@tallfuzzball Oh, I know I am but I always appreciate the compliment. ?