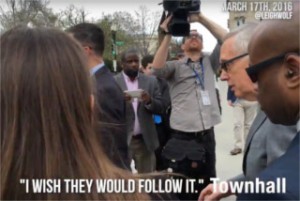 Slow clap for the wordsmiths at TownHall, who took nine seconds of video capturing a sarcastic senatorial quip, assiduously evacuated the whole thing of context, and spun it into one despicably misleading headline that demonstrates enormous contempt for readers and for the facts:

BREAKING: Harry Reid Agrees With the Biden Rule, “Wishes (Republicans) Would Follow It”

The breathless, deeply disingenuous headline, and its accompanying article written by Leigh Wolf suggest that Senate Minority Leader Harry Reid is a hypocrite. Reid is, of course, currently leading the charge among Senate Democrats blasting the Republicans’ obstruction regarding the vacant SCOTUS seat. The “Biden rule” (which, my colleague Tommy Christopher helpfully explains, is “complete crap”) supposedly points to a Democratic precedent for Republicans’ current intransigence. If Sen. Reid were caught agreeing with it… my, how damaging that would be.

Wolf’s smoking gun? This nine-second video clip he filmed of himself pressing Reid about the “Biden Rule” as he walks:

Except that, when taken in context with Reid’s remarks Thursday, his sardonic, dismissive line becomes obvious for what it is: a withering condemnation of Republicans who have cooked up this flimsy “Biden rule” pretense, but have then refused to actually follow Biden’s example of giving every nominated judge a hearing.

“I talked to Joe Biden today. One of you asked me, ‘What about the Biden rule?’ There is no Biden rule. That’s something they made up. Joe Biden during his entire tenure as chairman of the Judiciary Committee, he processed all Supreme Court nominations. And to his credit, even though the committee did not approve nominations he would bring them to the floor anyway.”

To TownHall (and Wolf’s) credit, the YouTube page on which the video appears self-identifies as comedy, so it does seem to be more self-aware than either the site itself or the #tcot lemmings energetically retweeting the “story.”

Except it isn’t really “comedy” either. It’s just the worst, most contemptible kind of “journalism.” But, hey, it did get me to click the link. Well done!