Translating the Argentina Gay Marriage Story One Tweet at a Time 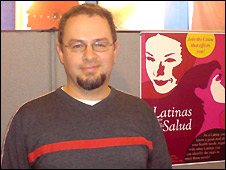 Andrés Duque–known to his Twitter and blog followers as Blabbeando–knew he was probably tweeting too much about the gay marriage vote in Argentina when Twitter cut him after only about three hours of translating the debate in the Argentina Senate.

But his twitter feeds, in Spanish and English, became the go-to sources for people in both the United States and Latin America following the historic 14-hour debate and early morning vote in Buenos Aires with the Los Angeles Times and powerhouse gay blogs JoeMyGod and Towleroad taking notice.

Duque–who tweets at @Blabbeando for his English-language followers and @NoticiasLGBT in Spanish–began tweeting translations of the debate after Joe Jervis at JoeMyGod posted a link to the live debate.

“I was sitting and watching and figured, why not?” Duque told Mediaite. “I’d been writing and thinking a lot about gay marriage in Argentina and I saw that a lot of people were having trouble following the debate, so I decided to jump in.”

Staying up all night and providing play-by-play, Duque said he started getting many followers and retweets and he knew that he was one of the few people doing significant coverage of the vote in the U.S. and in Argentina.

He quickly jumped on the #matrimoniogay hashtag and his tweet after the vote–#ARG MARRIAGE EQUALITY IS LAW IN ARGENTINA 33-27 #MatrimonioGay http://bit.ly/aTau1–has been retweeted almost 100 times.

Duque has found a citizen journalism niche in covering LGBT issues in the Latino community and in Latin America.  He says that his goal isn’t to be provocative, even if it drives hits, but instead just to provide information.  The former HIV/AIDS activist in New York City covers people like Ricky Martin, but also the immigration debate in the U.S., Medellin, attending his first gay pride parade in Colombia, and the World Cup.

He has recently had success in translating videos and newsclips from Spanish to English.  Two videos from Argentina on gay marriage became viral sensations, all with translations and subtitles by Duque, landing on Andrew Sullivan and Dan Savage’s blogs. He has a new video out translating an announcement by Argentina’s president Cristina Fernández de Kirchner defending her support of the gay marriage bill.

In the end, Duque says his goal is to “be a part of driving the story” and gaining more exposure for Latinos in the gay community and telling the stories of LGBT people throughout Latin America.