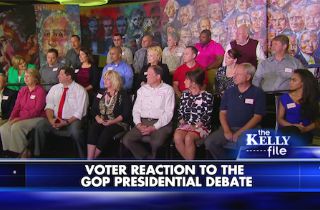 Donald Trump adviser Michael Cohen is convinced that a Fox News focus group last night was a huge “setup” because (gasp) people were turned off by Trump’s attitude and lack of specifics. Luntz showed last night that a few people who came into the debate liking Trump came out of it not liking him so much.

Former Trump fans were disappointed because “he skirted around questions better than a lifelong politician ever had,” he had “no specifics,” he didn’t look presidential, acted “mean,” and refused to commit to the GOP.

Well, because Trumpworld can totally take criticism well, Cohen lashed out at Luntz for what he believed to be a “setup”:

A total setup by @FrankLuntz and #FOXNEWSDEBATE to try to lower #Trump2016 high poll numbers. American people will not fall for your tricks.

Even Trump got in on bashing Luntz and the focus group because that’s what he does:

.@FrankLuntz is a low class slob who came to my office looking for consulting work and I had zero interest. Now he picks anti-Trump panels!

.@FrankLuntz I won every poll of the debate tonight by massive margins @DRUDGE_REPORT & @TIME so where did you find that dumb panel.

.@FrankLuntz, your so-called "focus groups" are a total joke. Don't come to my office looking for business again. You are a clown!

If you think my focus groups are faulty, you can set them straight.

Join my next one here: http://t.co/uYyV1g0WbQ

You can watch the focus group here, via Fox News: