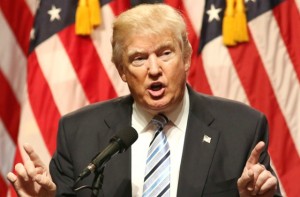 Donald Trump‘s campaign put out a statement tonight after Trump yet again dodged on his past birtherism. Trump said he doesn’t want to talk about it and hinted that he might “at the right time.”

The campaign invokes the claim that Hillary Clinton‘s campaign spread this around in 2008 (there were nasty rumors circulating during the campaign, but Clinton’s campaign did not come out and say he wasn’t born here), and they are insisting that Trump is no longer a birther.

However, they argue he deserves credit for “compelling” President Obama to settle the issue.

Hillary Clinton’s campaign first raised this issue to smear then-candidate Barack Obama in her very nasty, failed 2008 campaign for President. This type of vicious and conniving behavior is straight from the Clinton Playbook. As usual, however, Hillary Clinton was too weak to get an answer. Even the MSNBC show Morning Joe admits that it was Clinton’s henchmen who first raised this issue, not Donald J. Trump.

So wait, Trump’s campaign is now contending that this all was settled in 2011? Then why has Trump talked about it in the years afterwards.

Let's take a closer look at that birth certificate. @BarackObama was described in 2003 as being "born in Kenya." http://t.co/vfqJesJL

An 'extremely credible source' has called my office and told me that @BarackObama's birth certificate is a fraud.

With @BarackObama listing himself as "Born in Kenya" in 1999http://bit.ly/JaHQW0 HI laws allowed him to produce a fake certificate. #SCAM

"@obamafraudulent: @realDonaldTrump @d18mt2 The birth certificate that you forced Obama to show is a computer generated forgery.

How amazing, the State Health Director who verified copies of Obama’s “birth certificate” died in plane crash today. All others lived

Attention all hackers: You are hacking everything else so please hack Obama's college records (destroyed?) and check "place of birth"

Trump also resurrected claims that the president is foreign-born, saying “fine, if you believe that” when asked about the president’s released, long-form birth certificate, before diverting back to talking points.

Also, wait, “having successfully obtained President Obama’s birth certificate”… when the hell did that happen?

And Trump himself seems to think he deserves credit too for having to force President Obama to prove to the American public that he was not foreign-born:

Always remember, I was the one who got Obama to release his birth certificate, or whatever that was! Hilary couldn't, McCain couldn't.

And by the way, Trump keeps saying if he answers the question now it’s all people would talk about.

Well, um, not if his answer is “He was born in this country”…