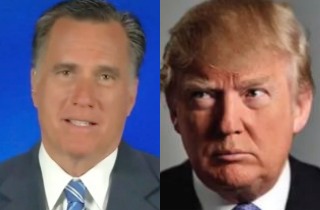 Because Donald Trump can never allow any attack on him to go unpunished, he took to Twitter this morning to unload on Mitt Romney for saying his rhetoric could bring harm to the GOP.

Romney recently sat for an interview with David Axelrod, where he addressed topics that included a comparison on how political correctness affected his presidential run to that of Trump’s. Romney concluded that a number of Trump’s controversial statements were “hurtful,” “childish,” and would remain a liability for him and other Republicans for the rest of his campaign.

“I think will be potentially problematic in either a primary or a general election if he were to become a nominee,” Romney said. “Some of the things he’s said, particularly about Hispanics, will be problematic…Everything you say can and will be used against you in the court of public opinion.”

Romney gave these critiques on Friday, but today, Trump finally responded in the way he does best:

.@MittRomney can only speak negatively about my presidential chances because I have been openly hard on his terrible “choke” loss to Obama!

.@MittRomney and his campaign manager should not be critical of candidates after they blew an election that should never have been lost!

Does everyone remember @MittRomney and his famous remarks about “self-deportation” and “47%”. He was done. I don’t need his angry advice!