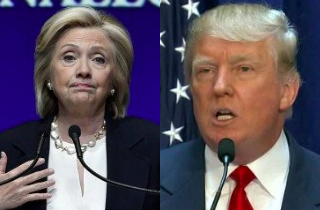 Even after telling his Instagram followers how “pathetic” it was that Hillary Clinton “blamed” him for the “horrendous attack that took place in South Carolina,” Donald Trump had more to say on this issue during an interview with conservative radio host Hugh Hewitt Monday.

Clinton did not actually reference Trump by name when she spoke to Nevada’s Jon Ralston last week, but she did mention “a recent entry into the Republican presidential campaign” who “said some very inflammatory things about Mexico.” Most likely, she was referring to the line in his presidential announcement speech regarding alleged Mexican drug dealers, rapists, killers and murderers infiltrating the United States.

And she did not exactly blame those comments for the mass shooting in Charleston, but rather that it was “emblematic” of the type of rhetoric coming from the right that helps inspire racist sentiments.

“Number one, I’m honored,” Trump said in response to Clinton’s comments. “And number two, I believe strongly in a very, very strong border,” he continued, adding that “we have no border right now.”

Trump insisted that he has a “great relationship with Mexican people,” despite what this one piñata maker might have you think. Some people thought that was a racist statement, but it’s not,” he said, claiming that he wants to keep people from all countries out of America, not just Mexicans.

Asked if Clinton had “falsely accused” him of using inflammatory language, Trump answered affirmatively. “All I do, is I want to have borders,” he said. “Now, if that is ‘incenduary,’ if that is being tough or being unfair, you let me know.”