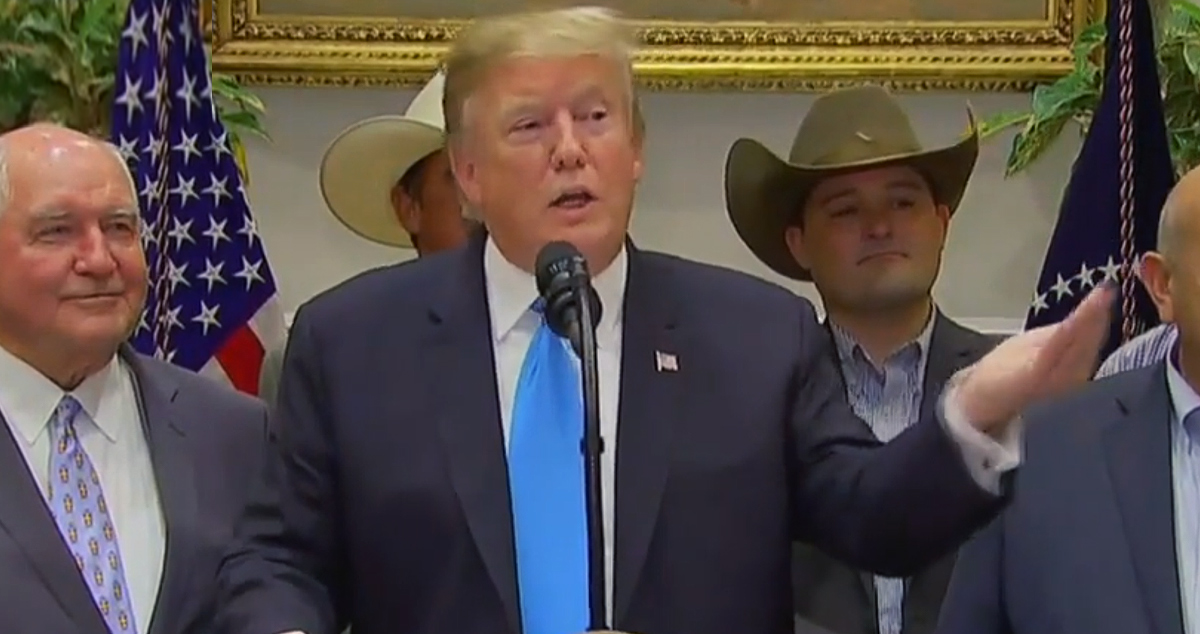 The Twitter-verse reacted with mockery, confusion, and more than a little genuine concern in the wake of President Donald Trump’s surreal press conference on Thursday, in which bashed House Speaker Nancy Pelosi (D-CA) as “a mess,” declared himself an “extremely stable genius,” and singled out his aides one by one and encouraged them to positively describe his “very calm” demeanor, a public display of loyalty that wouldn’t be out of place in a Banana Republic.

Many reactions online took to mocking the president for once again interrupting White House business to attack a political opponent and indulge his narcissistic tendencies.

I am an extremely stable genius.
— Pericles

Seward is “dumb as a rock” and totally ill prepared and ill equipped to be Secretary of State.
— Lincoln

I was extremely calm. Very much like I am right now.
— Ghandi

This is the single greatest witch hunt in history!
— Mandela

I HAVE A VERY CALM DEMEANOR pic.twitter.com/sKrZx5ezb6

The best part of Trump again saying he’s “an extremely stable genius” is that everyone’s first reaction is to laugh at him pic.twitter.com/QYXcL9sztc

And that leads me to repeat: I know only one stable genius. Mr. Ed. https://t.co/quuRxcA1Ml

Trump is just unloading on Pelosi right now. Says he wants to call her “crazy Nancy” but he’s already given the Crazy tag to Bernie. He adds Pelosi has “got some problems.”

But he insists, he was “very calm” in yesterday’s meeting.

NOTABLE: As TRUMP calls on senior staff to testify to his calmness, @PressSec suggests she’s seem him “ranting,” which the @WhiteHouse says he doesn’t do: “I’ve seen both, & this was definitely not angry or ranting. Very calm, & straightforward & clear…” pic.twitter.com/Ss8qjwl8JZ

Dear @realDonaldTrump: A well known fact of human nature is that a person who is actually a #stablegenius would have no need to say it.

Also, why are you suing to eliminate health care coverage for Americans with pre-existing conditions? A stable genius wouldn’t do that. https://t.co/DDuVQKDegz

But others found little to laugh about in the bizarre scene. It prompted one of Trump’s former campaign aides, Sam Nunberg, to declare: “today was self-destrution.” Others, like former White House press secretary Joe Lockhart called his behavior “frightening” and intimated that Trump should be removed from office using the 25th Amendment.

We’re all numb to the bizarre behavior of @realDonaldTrump and it’s almost funny to watch.But our President is anything but stable and is not a genius.His behavior overthe last twodays is frightening.Its time for the cabinet toperform their constitutional duty for love of country

And Speaker Pelosi, who continues to get under Trump’s skin like no one else can, also fired back, throwing some shade at his self-described brilliance with ironic quotes and urging him to act “more presidential” so House Democrats could work with him.

When the “extremely stable genius” starts acting more presidential, I’ll be happy to work with him on infrastructure, trade and other issues. https://t.co/tfWVkj9CLT

Perhaps the biggest takeaway from the president’s petty score-settling and self-congratulatory encomiums was that the whole episode felt disconnected from reality and that our government in Washington was increasingly coming apart at the seams. Or, what you might call Thursday for the Trump White House.