Trump in 2009: ‘All Men Are Created Equal’ is ‘a Very Confusing Phrase’ 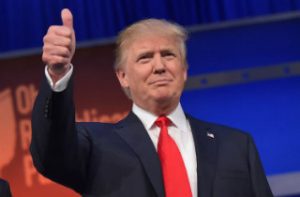 On Monday, presumably owing to it being Martin Luther King Day as well as four days before Donald Trump’s presidential inauguration, New York Times contributor Deborah Solomon dug up the original transcript of a 2009 interview that she conducted with the president elect. In going through her notes, Solomon found an interesting passage that had been edited in the published article, and decided to tweet it out to her followers:

Found a transcript of my '09 talk w/Trump for the @NYTimes. He says he doesn't get why "all men are created equal." pic.twitter.com/No4zS0OHTL

If you can’t see the image, here’s what it says:

Donald: Either they don’t have the energy, maybe they realize they don’t nave the talent. It’s not just wanting to be a champion, you need certain ingredients. They say all men are created equal. It doesn’t get any more famous but, is it really true?

Deborah: they’re entitled to equal treatment under the law. I think that’s what the statement means. It doesn’t mean everybody has the same endowments.

Donald: That’s correct. The phrase is used often so much and it’s a very confusing phrase to a lot of people.

Here’s how it was condensed in the printed version:

As the boss of the boardroom in the TV show “The Apprentice,” do you think anyone can be a champion?

Your mileage may vary as to which version is more flattering.