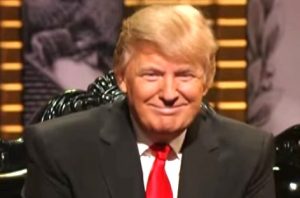 In our communal effort to now try to figure out what kind of president Donald Trump will be (an endeavor which has traditionally, until this year, been undertaken BEFORE a presidential election has been completed), it seems there has been a lot of misdirected focus. It appears that, especially on the left, most of the concern is that he will turn into a racist dictator of some sort.

However, the left, as they so often do, is not only overplaying their hand with regard to who Donald Trump is, but they are also missing the primary point almost entirely. While I understand how someone who bought into the left’s “alt-right” “white supremacist” caricature of Trump might see his authoritarian “law and order” language as real warning signs of the rise of a Hitler-like figure (did you know that they were both named Time’s “Person of the Year”?), I think this conclusion requires a fundamental misunderstanding of who Trump is.

Whether he even fully realizes it himself, I see Trump as carving out a new role of “King of America” for himself. Judging from his first month as “president-elect,” it is very clear that the Trumpian view of the presidency is much more in line with that of the early 20th Century British monarchy than how our founders conceived of the position of commander in chief (heck, have you seen his living quarters in Trump Tower?!).

In Trump’s mind, since “only he” can solve our problems, he is doing this all as a service to our country, but he isn’t a details person and he doesn’t like red tape or the nuts and bolts of actual governance. It seems that he has made vice president-elect Mike Pence his “Prime Minister,” while Trump’s role is to do the fun stuff while “making America great again.”

In theory, this is somewhat like the Ronald Reagan vision of the presidency which was famously parodied by Phil Hartman’s “Saturday Night Live” depiction of the president as only pretending to be mostly ceremonial while he actually ran every little detail of the White House. That model worked rather well for Reagan because he had at least two qualities which Trump does not: self-restraint, and an understanding of how our system was set up to guard against the dangers of a king.

Before he has even been inaugurated, Trump has done many things which fit far more the mold of a king than of a president. Here is just a partial list:.

The primary reasons this is all happening have mostly to do with the convergence of celebrity and the presidency, Trump’s unique mentality, and the media’s impotence to do anything about it.

You could easily argue that President Obama, a celebrity personality in his own right, took the presidency strongly in a direction of a kingship. After all, he promised that his time in office would mark the moment when the seas began to stop their rise and he often governed more by executive order than by legislative action. Even his primary legislative achievement, Obamacare, was passed without a single Republican vote at any level.

However, even Obama had at least some marginal restraint here. This was partly because, unlike Trump, he had at least studied the Constitution, and partially, counter-intuitively, because most of the news media was SO in the tank for him. Obama was a master at knowing what his adoring fans in the media would let him get away with, but he was also very wary of making sure he not push it too far and risk their rebuke. In a very real way, Obama with the media was like a guy who knew he had no immunity to major diseases and therefore was careful not to engage in behavior that was too risky. Or, since he’s a basketball fan, he was like Michael Jordan knowing the referees would let him get away with ALMOST anything and so he respected the very generous line in the sand they had drawn just for him.

Conversely, in a very weird way, Trump is completely unrestricted by the news media because, other than his propaganda machine on the “right,” they all have disdain for him and he literally has nothing left to lose. Having somehow weathered their (poorly executed) attacks during the general election, Trump now has complete immunity from any and all mainstream media diseases/criticism regarding his leadership style. So when a previous president would immediately pull back if the “respected” media warned of him becoming some type of a monarch, Trump will only view that development as a sign he’s actually on the right track.

The reason the news media is so vital here (and why it is so dangerous that Trump has effectively neutered them politically) is that our modern system is largely based in the concept that the president would be reined in by his own willingness to “self-police” and by the ability of the public/press/congress to restrict him when necessary. Our founders never imagined that the president would be able to communicate instantly with vast portions of the population with absolutely no filter, and they probably never thought that well over half the country would never get any political news that they didn’t want to hear.

In a sense, I see Trump here as a professional golfer, playing a game largely based in the concept of “self-policing,” who has simply decided that he won’t inforce the rules against himself and that the officials are to be ignored (this analogy is especially appropriate since it has been widely reported that Trump is a notorious cheater on the golf course). He’s simply going to (reminiscent of North Korea’s Kim Jong Il claim that he made 11 holes-in-one in his first round of golf) mark down whatever score he thinks he deserves on a hole, and it really doesn’t matter what the refs/press say about it.

There are many disturbing aspects of the coming Trump presidency, but the most underrated is probably how Trump will move us closer to the system from which we originally revolted than we have ever been before (or at least since FDR). Amazingly, there is nothing any of us can do to stop it because, as long as things go decently well, enough of the public, and bizarrely even “conservatives,” are going to have no problem with it.

Even though our founders didn’t anticipate Twitter, they did warn us about Trump. It’s just too few of us bothered to care or understand. So now, our best chance to get something better than we deserve is based in little more than pure luck.