Trump: My Rallies ‘Are the Safest Places a Child Could Be’ 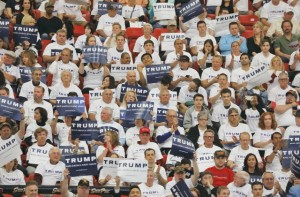 Maureen Dowd‘s latest column features an interview she conducted yesterday with Donald Trump and boy, is it full of Trump’s typical ramblings.

For one, he kept his Megyn Kelly feud going by calling her a “‘total whack job’ with ‘no talent.'” He also got snarky with Elizabeth Warren by saying, “I think it’s wonderful because the Indians can now partake in the future of the country. She’s got about as much Indian blood as I have. Her whole life was based on a fraud.”

In response to people calling him a racist and a bigot and a misogynist, Trump said, “Honestly, I’m with the people. The people like Trump.”

As for his rallies, he said he’s not the one egging on violence (even though he kinda is), it’s the “agitators.” And in the span of a few days, he’s gone from blaming them on Bernie Sanders to blaming them on Hillary Clinton.

And that’s not all (emphasis added):

But shouldn’t parents be able to bring children to rallies without worrying about obscenities, sucker punches, brawls and bullying? “The rallies are the safest places a child could be,” Trump replied primly.

Didn’t the man rushing the stage give him pause? “I got credit for that because it looked like I was moving toward him,” he said.

Trump said that when the “agitators” scream and the crowd screams back, “Frankly, it adds a little excitement.” But there must be a safer, saner way to get some oomph.