Trump Says He Doesn’t Know Putin, But He Used to Say He Knew Him ‘Very Well’ 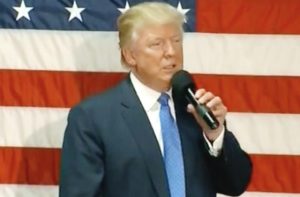 But a little over a year ago, he stood on another debate stage and said, “I got to know him very well.”

During the Republican primary last November, Trump said that he and Putin became close because they appeared on 60 Minutes together. He said:

But, as far as the Ukraine is concerned, and you could Syria — as far as Syria, I like — if Putin wants to go in, and I got to know him very well because we were both on 60 Minutes, we were stablemates, and we did very well that night.

This is not the first time Trump has tried to rewrite history about whether or not he knows Putin.

But in 2013, MSNBC’s Thomas Roberts asked Trump,“Do you have a relationship with Vladimir Putin? A conversational relationship or anything that you feel you have sway or influence over his government?”

In July, Trump explained what that “relationship” entailed: