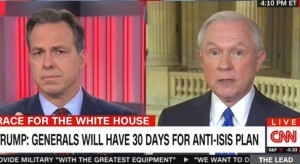 Specifically, on Wednesday afternoon CNN’s Jake Tapper asked Trump adviser Sen. Jeff Sessions to explain why Trump was insisting now that he’d give generals 30 days to produce a plan to defeat ISIS, when he had previously asserted both that he had a “foolproof” plan to defeat ISIS and also that he knew more than the generals did. Sessions accused Tapper of “having fun” with his straightforward line of questioning.

“I don’t think he ever doubted that he’d be talking with the generals on how to achieve [his goals],” Sessions said.

Sessions simply repeated that “we’re gonna defeat ISIS” and that “Donald Trump was committed to that.” When Tapper asked for clarification, Sessions said that the anchor was simply “having fun with [his] argument.”

You can view the exchange above, via CNN.