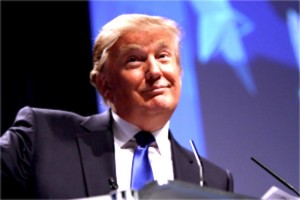 Republican presidential nominee Donald Trump‘s campaign rolled out their team of economic advisers on Friday, and while it would probably not surprise anyone to learn that the list contained the names of fifteen white males and zero others, Emily’s List noticed something peculiar about this particular list of white dudes. In an email noting the lack of diversity among the list that was published by Politico, they noted that even for a list of just white guys, there was a peculiar sameness:

Emily’s list pegged the number at five, but including the team leader (and why wouldn’t you?), there are six guys out of fifteen who are named some variation of “Steve,” and one guy named “Barrack” (don’t worry, he’s white). In case you’re wondering, and I was, the name Steve has never even cracked the top 5 most popular names in the U.S., at least not since 1916. It’s just a weirdly popular name for the white dudes on Donald Trump’s economic team.