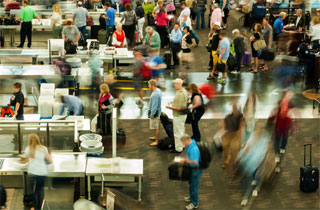 In 1925, a man offered $25,000 to the first man to fly across the Atlantic, won by one Charles Lindbergh. In 2004, the Ansari X Prize propelled SpaceShip One into the boundaries of outer space. And now, the TSA is set to offer a prize that will change aviation forever…by offering money to the person who can solve the problem of why airport screening lines suck so bad.

The LA Times reports that the Transportation Security Administration is offering $15,000 in prize money to people whose proposals can objectively make pre-flight screening less miserable and confusing — in short, to remove the “fuck” from “clusterfuck.”

The old systems, involving long lines winding through a labyrinth made of “retractable belts and barriers,” no longer suit the modern-day needs of the TSA:

The TSA has several categories of travelers to screen, including premium travelers, passengers in wheelchairs, pilots and crew members, as well as fliers using TSA’s PreCheck program, which offers faster screening for those who voluntarily submit background information.

Putting all of these travelers in the same lines creates confusion and delays.

So…why not make multiple lines for these categories, and occasionally funnel the overflow into lines that aren’t being used? Like, if there are a lot of travelers in the normal line, and only two people in the premium line, just direct some other travelers to that line, while giving the premium travelers priority in line. Boom. Solved the TSA. May I have my $15 G’s?

$5 grand for solving the TSA? That’s it? No wonder your maze system is as antiquated as a Greek myth.