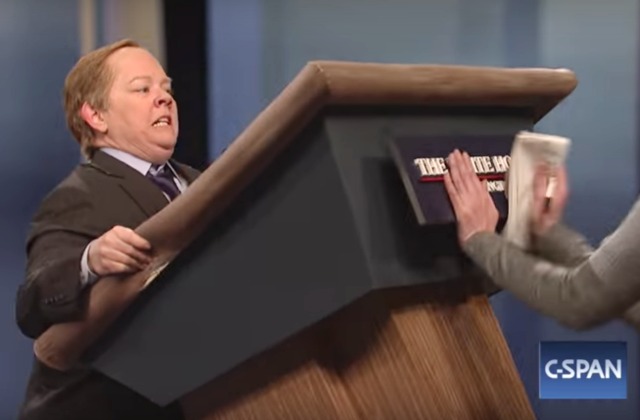 A new report on how President Trump reacted to Melissa McCarthy lampooning Sean Spicer on last weekend’s SNL inspired quite a lot of fancasting on Twitter tonight.

You may have noticed that, despite Alec Baldwin returning to play Trump (along with Death as Steve Bannon), the president did not tweet his reaction to the show like he normally does. That sketch was pretty clearly eclipsed by McCarthy’s insane portrayal of a pissed-off Spicer yelling at and literally charging the podium at reporters.

A Politico report tonight says the sketch did not go over well at the White House, and there was one part in particular that bothered Trump:

More than being lampooned as a press secretary who makes up facts, it was Spicer’s portrayal by a woman that was most problematic in the president’s eyes, according to sources close to him.

Well, this detail was all it took to get Twitter to start fancasting other actresses and comediennes who could play certain roles on SNL (you may notice one recurring name in particular):

omg if Rosie O'Donnell plays Steve Bannon on this weekend's #SNL, it might actually be enough to get Trump to fire him

Time for Ellen to call SNL and volunteer to play Mike Pence.

Alrighty. If someone knows how to get ahold of SNL writers, please ask them to have .@Rosie play @realDonaldTrump in the next SNL #SNL https://t.co/Bz5HkZPG5r

The tease of @Rosie playing #PresidentBannon next week on #snl has me giddy.

SNL should have different celebs play Trump every week. Anyone and everyone. Women, gays, blacks, browns, everyone. Drive him fucking nuts.

Sorry, Alec Baldwin, but the nation needs @Lesdoggg to play Trump from now on. https://t.co/HIxy7XGJ7V

Can we petition SNL to have Rosie O'Donnell play Trump next Saturday? That would put him RIGHT over the edge. https://t.co/ZIL605NMug

Current rankings of women who should play Trump on SNL, per my mentions: 3. Kate McKinnon. 2. Meryl Streep. 1. Rosie O'Donnell

For the love of all things holy, SNL should have Betty White play Trump from now on.

Cold open next SNL should be all the women cast members doing an audition to play Trump. Maybe get some more guest stars in there.

No, have Rosie play Bannon, with Trump taking orders from her. https://t.co/kxgcnbMCCs

Rosie O’Donnell had this to say to one of the people throwing out her name: