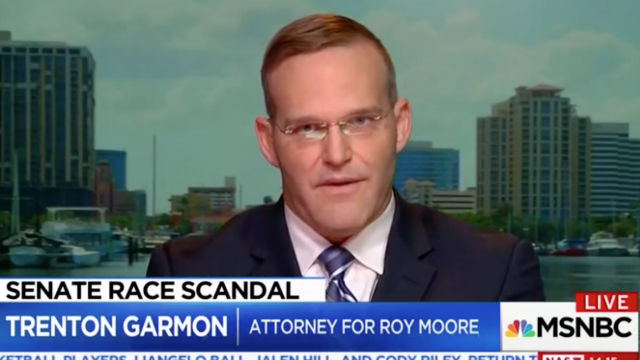 Moore attorney Trenton Garmon decided to go there this morning by invoking Ali Velshi’s “background” in talking about cultures where it’s cool for adults to hook up with teens.

Velshi is from Canada, and his co-host Stephanie Ruhle stood up for him against this nonsense.

You can watch the whole thing unfold here, but Twitter relentlessly hammered Garmon for trying out this line of “argument”:

2. He suggests our colleague @AliVelshi would understand the idea of adults dating teenagers because he has “spent time in other countries.” (?)

Ali was merciful not to run circles around this guy. https://t.co/DzLYYDX3Cy

My friend @AliVelshi is Muslim and was born in Kenya, which I assume is what Moore’s attorney is referencing. This is disgusting. https://t.co/t452oNmZup

This is really incredible, Roy Moore’s attorney decides it’s a good idea to be racist on national television. https://t.co/ffgFr98v47

Aside from the “what the f?” reaction … is he now admitting that Moore did do it? Because justifying it this way strongly suggests they are laying groundwork for a defense of it. https://t.co/O1zb1tPzqH

Paraphrased: “Some places are in to underage marriages and sex slavery. This guy knows what I’m talking about! Am I right?” https://t.co/v9uronnWFA

Just when you thought the Roy Moore shitshow couldn’t get any uglier, you were quite mistaken https://t.co/75HDbGkWv7

Disgusting display from a Roy Moore surrogate. Kudos to @AliVelshi and @SRuhle for handling it with cool professionalism. https://t.co/g9pv6yAuNH

Also his attorney seems to think that referencing arranged marriages is a solid defense? https://t.co/SurDhgjaxv

What the fuck did I just watch https://t.co/ipCQRPfknt

Came from the inappropriate reference to @AliVelshi‘s background. Stayed for the suppressed look of “Watch Yourself” on Ali’s face. https://t.co/N7IRoMzkPJ

Lord, give me the serenity of Ali Velshi listening to a lunatic racist lawyer suggesting he knows about dating children because he is browner than a Heath bar.

Holy crap. Roy Moore’s incompetent attorney starts to reference anchor @AliVelshi ‘s background to bring up how other cultures allow adult men to marry children. This is supposed to be a defense of Moore. https://t.co/OhGaKWpm98

The restraint and grace of @AliVelshi during that interview…… Amazing but not unexpected. I, on the other hand, would have been….. pic.twitter.com/aqSZtVVcEL

This is incredible. The lawyer seemingly tries to cite Ali Velshi’s background to say it’s normal in some cultures for adults to date teenagers. “Ali’s from Canada!” https://t.co/ZQ5Fqf2HE3

“My client categorically denies these allegations, but let’s keep an open mind about 31 year-old-men dating them because we need cultural sensitivity.” — SUPER LAWYER! https://t.co/XmrISWu4lj

This is a whistle. Nothing dog about it. https://t.co/CGAd8dWHLb

I don’t get the feeling Roy Moore’s lawyer is a top legal mind. https://t.co/17I9wcMyRi

If you want to talk about unsubstantiated rumors and questionable documents, let’s start with this guy’s claim to have a law degree. https://t.co/1M2shODOz7

And again, Ruhle came to her co-host’s defense:

Planet Earth…. that’s where @AliVelshi is from https://t.co/GIkAseMHgw