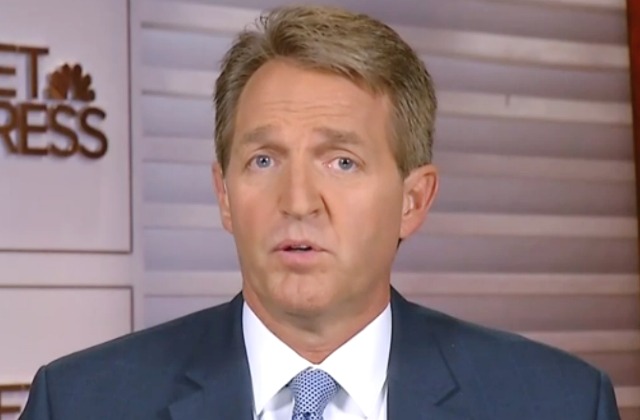 In what has already been a crazy day in Washington, Sen. Jeff Flake (R-AZ) decided to make it even nuttier when news dropped that he was not going to seek re-election in 2018.

In his statement, Flake — who has run afoul of President Donald Trump in recent months — essentially said he was leaving the GOP as well, stating that there is not a place for him in the current Republican climate and party.

With Flake taking his stand and delivering a no-holds-barred anti-Trump speech on the Senate floor on a day when Trump has engaged in a vicious back-and-forth with another GOP lawmaker who isn’t running, Twitter weighed in with a whole bunch of hot takes.

This is a remarkable speech. Flake isn’t just calling out Trump, but all of his GOP colleagues.

This Corker-Flake one-two punch at Trump is something else…

It must have been such a shock to Jeff Flake when he woke up this morning and learned that Donald Trump is an insane and divisive lunatic.

With Flake not running, there’s now another senator who absolutely frigging loathes the president and owes nothing to anybody

Jeff Flake……….congrats on your new job as president of the Heritage Foundation

Jeff Flake is a bandit who doesn’t want to be associated with super villains.

Jeff Flake’s speech on the Senate floor will end up in the history books.

Due to the civil war nature of today’s GOP, one side was absolutely thrilled:

Bannon ally gloats to me about Flake’s retirement “Another scalp!”

Corker. Now Flake. Who’s next? As Breitbart wages war on GOP, many incumbents are wary of slogging through 2018…

Trump talkers are all in behind Ward, for those who think a white knight will save the AZ seat for conservatives.

And someone just had to do the obvious joke:

So you’re telling me that Jeff is going to

And at least one person wondered how a certain someone would react: