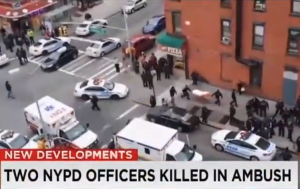 There are certain technologies that are well past their expiration date: The 8-Track player, beepers, the Boom Box…each all had their day, but those days long gone.

Included in that list is the fax machine. Believe it or not, this was once seen as cutting edge technology…back in the 1970s, anyway. Per Ben Fong-Torres, non-fictional Rolling Stone editor in the fictional Almost Famous when instructing the film’s teenage protagonist how to send his story and notes “quickly” from across the country:

“There’s a mojo at the Daily News they’ll let us use. It’s a very modern machine that transmits pages over the telephone. It only takes eighteen minutes a page….”

Fast forward 40 years later, where it was revealed today that the Baltimore County Police Department sent a fax–yes, a fax–to the NYPD warning them of Ismaaiyl Abdullah Brinsley possibly coming their way. You know the rest: Brinsley–who already shot and wounded his girlfriend hours earlier in Baltimore–heads north to Brooklyn and ambushes two officers—Wenjian Liu and Rafael Ramos sitting in their marked car in what was an execution without provocation. Shocking, disturbing, revolting…take your pick; It was an assassination committed in broad daylight in one of the most populated cities in the country. The aftereffects will be felt for months and potentially years to come.

Authorities in Maryland say they were altered of statements on social media indicating Brinsley planned to kill police officers because he upset about the Michael Brown and Eric Garner cases out of Ferguson and Staten Island, respectively. But here’s the most frustrating part: Reports now say that warning fax (with a photo of Brinsley) from Baltimore County came just 37 minutes before the two officers were assassinated, and it wasn’t sent to the correct Precinct (the 70th instead of the 84th).

Per the CNN report and analysis below, why the Baltimore County authorities couldn’t show more urgency beyond faxing is difficult to compute. Were they playing Space Invaders on their Ataris at the time? Was the wheel on the rotary dial on said phone not working? Was the warning sent via that fax written on a typewriter? Who faxes anything in 2004, let alone 2014?

Two officers might have been saved yesterday, but perhaps regardless of the technology available it might not have made a difference. Either way, it’s clear that at least one police department is in serious need of re-training on basic process, along with a technological overhaul in general.

Watch the report on the fax below, via CNN:

Correction: Baltimore County Police report a wanted poster in fax form was sent to the NYPD’s 70th Precinct at 2:10 PM, but the officers who were killed were from the 84th Precinct and were assisting in the 79th Precinct on Saturday. The shooting occurred at 2:47 PM. A second communication–a teletype, an electromechanical typewriter (whose general use has waned greatly since the 1980s)–with the same information contained on the wanted poster was sent to the NYPD’s real-crime center at police headquarters at 2:50 PM, three minutes after the shooting.

UPDATE – 12/22/14: The headline has been changed to reflect the correct police agency. Baltimore County Police, vs. Baltimore Police