Utah Lt. Governor Apologizes for Anti-LGBT Past During Orlando Vigil 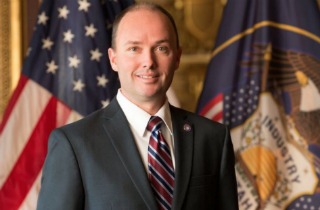 The Orlando shooting has prompted a global outpouring of grief for the LGBT community. While there are certain homophobes who’ve been unmoved by the tragic events at a gay night club, one recent prayer gathering saw a conservative politician soften his heart.

Utah Lt. Governor Spencer Cox is known for being against pro-LGBT political initiatives, so it was bound to surprise some when he appeared to speak at a Monday vigil in Salt Lake City. Cox admitted that he hasn’t been friendly with gay people in the past, but he seemed to repent and endorse LGBT equality in a heartfelt address:

“How did you feel when you heard that 49 people had been gunned down by a self-proclaimed terrorist? That’s the easy question.

Here is the hard one: Did that feeling change when you found out the shooting was at a gay bar at 2 AM in the morning?

If that feeling changed, then we are doing something wrong.

I will forever regret not treating them with the kindness, dignity and respect — the love — that they deserved. For that, I sincerely and humbly apologize.”

While Cox didn’t get into the sociopolitical implications shrouding the massacre, he said LGBT community’s inclusiveness and patience with him in spite of everything has changed his perspective.

Watch Cox’s speech in the video above, via KSL.