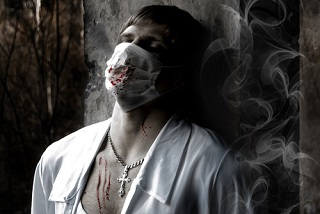 A subset of Americans consider themselves “real vampires” — they feel a physical urge to feed on either the blood or the energy of other people. They’re not repelled by garlic or crosses, they go out during the day, but one place they’re not going is to the doctor. Fusion uncovered a study in the journal Critical Social Work which dealt with this very issue. Why aren’t vampires seeking out the supportive and medical care that they need and deserve? If you laughed at this headline, you can probably guess why: they fear they won’t be taken seriously if they disclose their vampirism.

To clarify what, exactly, being a “real vampire” entails, forget about everything you thought you knew about vampires up until this point, except for the blood part. But even while some people do thrive on ingesting the blood of others, that blood is given with consent, as it the “pranic” energy craved by the other kind of vampire. It’s not about sex, nor is it about killing. It’s closer to an iron deficiency that calls for something more intense than a supplement. But it’s still stigmatized and that keeps self-identified vampires away from traditional medicine. And even judgement aside, understanding “vampire body chemistry” could mean a completely different diagnosis:

If a “vampire” who hadn’t fed in a while told a doctor that he felt fatigued and depressed, and that his skin and hair were dry — all common symptoms of vampires who have not “fed” — the doctor would most likely talk to him about, say, hypothyroidism before suggesting a session of energy work.

But the judgement by doctors and therapists doesn’t only extend to the social stigma of calling oneself a vampire. The medical field also believes that even screened, tested, and consenting blood donors as well as the bloodsuckers are putting themselves at risk for bloodbourne diseases such as hepatitis C and even HIV. So there are some minds to be opened on both sides of this issue.

So, if you or someone you know is a “real vampire” and isn’t seeking medical care, maybe at least have an honest conversation about coming out of the coffin.