Video Of UFO In Jerusalem Has World Scratching Their Heads 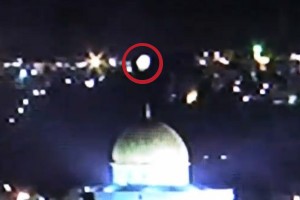 Sure, giant political revolutions with implications affecting the entire planet are pretty cool, but does the Egypt story have aliens in it? No, no it doesn’t! At least, not yet. That’s where this story has it completely beat. In Jerusalem last week, a shining light descended and hung in the air over the Dome of the Rock. The lights have yet to be explained, which is unsettling, but clearly there are worse explanations for “a bright light suddenly dropping from the sky onto the cities of Israel.”

Sure, these videos are hard to believe, and many will doubt any extraterrestrial or supernatural influence. However, unlike many sightings, this phenomenon was captured by four different cameras, held by completely different people. And The Sun quoted Former Ministry of Defence UFO investigator Nick Pope as saying that “The way it shoots up into the sky suggests it is unmanned, because no living thing could survive those kinds of G-forces,” which will prompt UFO skeptics to finally come out and admit that “Ministry of Defence UFO investigator” is apparently a real job. However, Pope himself was cautious, pointing out that Israel is known to have unmanned military drones, but remarked that it would have to be “one of the most advanced pieces of technology created by man.”

Meanwhile, in one video taken by an American tourist who remarks in the clip ““We‘ve seen ’em in Mississippi like this…but never like that.” This of course brings up an interesting question: Are UFOs the only instance where, the more sightings you’ve seen, the less reliable you appear as a witness?

Whatever the case, this is fascinating news, and clearly all the cable channels should stop covering the Daily launch (or anything else that’s going on) and start focusing on this! I mean, there are a bunch of reporters in the area.

Check out a video compilation from some of the videos via ITN News: