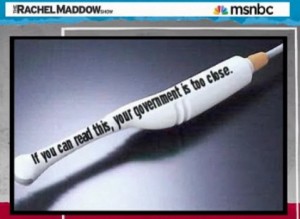 The most underrated prong in the current Republican War on Women’s Health is also that struggle’s most literal prong. While birth control, Planned Parenthood, and Bayer aspirin have been getting the most attention the past few weeks, the Virginia legislature has come a step closer to rendering the first two syllables of its name a cruel irony, passing a law that would force women who want to get a legal medical procedure to undergo a medically unnecessary vaginal probe.

We’re currently in the middle of a perfect storm of assaults on women’s health care that threatens to turn the GOP’s War on Women’s Health into a Democratic Year of the Vagina. Conservatives have been working for a long time to attack Planned Parenthood, the nation’s largest provider of health care for women, but that effort broke blindingly into the spotlight a few weeks ago when the Susan G. Komen breast cancer charity sparked an uprising with its attempt to de-fund Planned Parenthood’s screening program.

At roughly the same time, the Obama administration faced fire over a mandate requiring non-church religious employers to comply with the Preventive Services Mandate, which requires them to provide coverage for contraceptives to those employees. When the administration quickly offered an accommodation to satisfy (false) concerns about “religious liberty,” Republicans revealed that their issue wasn’t about “religious liberty” at all, but about allowing any employer to impose their beliefs on the women working for them.

Then, the GOP frontrunner’s main financial backer told a joke heard ’round the world that reinforced this authoritarian, paternalistic attitude, and the House convened a hearing about the contraceptive mandate whose opening witness panel contained no women. What was once an election about the economy has morphed into a referendum on women’s health, and Republicans can’t seem to stop themselves from trying to turn the government into every woman’s Daddy.

Underneath all of those fireworks, though, is an even more disturbing intrusion into women’s health, one which has gotten great, thorough coverage on MSNBC’s The Rachel Maddow Show, but has yet to take its place in the larger political narrative. Both the Virginia House and State Senate have passed measures requiring any woman seeking an abortion to undergo a medically unnecessary ultrasound, which means, in most cases, an invasive transvaginal ultrasound using the instrument pictured above. The patient isn’t even required to look at the ultrasound (just to endure it), but if she doesn’t, that fact becomes part of her permanent record.

Would these same legislators stand for a law that required men to undergo a rectal probe every time they wanted to abort a hot, steaming load of potential life all over the dust jacket of Atlas Shrugged (or whatever conservative men are using for “inspiration” these days)? Probably not, since a similar amendment, requiring a rectal exam in order to get Viagra, was shot down by the state senate. All that stands between Virginia women and this law is slavery-forgetting Republican Gov. Bob McDonnell.

There’s a broad spectrum of opinion on reproductive rights, and separately, a vigorous debate on the role of government, but Republicans seem to be missing the point that no matter what a normal person’s political beliefs are, most of them agree that the government doesn’t belong, literally, inside a woman’s vagina. If all goes according to plan in Virginia, not even an aspirin between the knees will keep them out.

Here’s one of Rachel Maddow‘s excellent reports on the subject, from MSNBC: