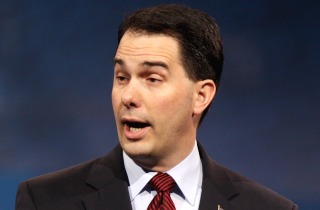 Congratulations on your official presidential announcement, Wisconsin Governor Scott Walker. Now you get to spend part of your day explaining away something one of your advisers said.

Speaking — wait for it — anonymously to National Journal’s Tim Alberta, a Walker adviser tried to calm fears the candidate was moving too far to the right in order to win the Iowa caucus by intimating that positions taken this early on are contingent.

“You start in Iowa and lock up conservatives, because if you don’t do that, none of the rest matters,” the adviser said. “It’s much easier to move from being a conservative to being a middle-of-the-road moderate later on.”

This of course is redolent of Mitt Romney adviser Eric Fehrnstrom‘s famous “Etch-a-Sketch” comment from 2012, which played right into the narrative that Romney changed his political positions to suit whatever electorate was in front of him (and did wonders for Etch-A-Sketch’s stock price.)

Perceptions of Walker are significantly less formed than they were of Romney. Nonetheless, Walker has battled perceptions that he’s willing to blur his positions on issues like abortion and immigration, telegraphing one thing to a conservative base while whispering something else to party establishment figures.

Walker is hoping a strong Iowa finish will give his campaign viability; he’s polled well there after a barnburning Iowa Freedom Summit performance made him a national contender last winter. Strategists worry, however, that tacking too far to the right to win Iowa will damage him in the rest of the primary, if not the general.