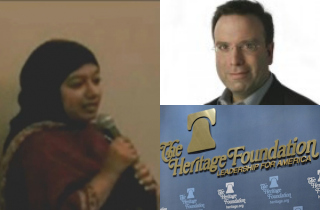 Washington Post columnist Dana Milbank started a flap yesterday over a Heritage Foundation Benghazi event. Actually he started two flaps, first over the event itself, which he said devolved into a mob-like mocking of a questioner in Islamic head dress, then over whether he had accurately reported the incident, which many who watched the later-released video believed he had not.

POLITICO’s Dylan Byers called the column “Dana Milbank’s Heritage Disaster,” arguing that Milbank had “grossly misrepresented” the entire exchange. It was Byers’ post that Milbank chose to focus on in his defense Wednesday morning, snarking that Byers had provided “a lesson in the limitations of armchair journalism.”

“Had Byers been at the event himself, he wouldn’t have swallowed the Heritage spin — hook, line and sinker,” Milbank wrote, arguing that the video excerpt did not capture much of the taunting response:

But had he been there, Byers needn’t have relied on appearances: He could have asked Ahmed himself, as I did. She told me she felt “targeted” by those in the room. And no wonder: She had just endured a raised-voice tirade directed at her by panelist Brigitte Gabriel, who had asked Ahmed’s citizenship, condemned her for taking the limelight, tossed in a Nazi Germany comparison and disparaged the very notion of “peaceful” Muslims – all for Ahmed’s sin of pointing out that not all Muslims are evil and that Muslims weren’t represented on the panel. The diatribe brought most of the 150 in the room to their feet, and they gave Gabriel two raucous rounds of applause lasting 28 and 17 seconds. Byers couldn’t see or hear much of that on his video clip – particularly the shouts of “hey!” and “hear, hear!” and “yeah!” and “woo-hoo,” which were on the recording I made from the audience. The moderator made no attempt to calm things and indeed made it worse by mockingly challenging Ahmed to name “the head of the Muslim peace movement.”

“Byers, alas, may never have the experience,” Milbank concluded. “He reports that he’s moving to California, where it will be just as easy to cover journalism the way he has covered it from Virginia. They have armchairs on the West Coast, too.”

Read the rest of the defense at the Washington Post.