Was HCR Actually That Unpopular, Or Did The Media Make It So?

Was HCR Actually That Unpopular, Or Did The Media Make It So? 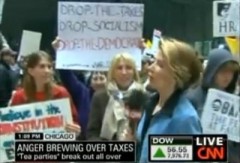 Miracle of the ages. Two days after the historic health care bill passed — alternately known in some circles as Armageddon — initial polls are showing that health care approval ratings have gone up (also President Obama‘s). A USA Today/Gallup Poll finds that “49%-40% of those surveyed say it was ‘a good thing’ rather than a bad one that Congress passed the bill.” This is in contrast to last week when there was “a plurality against it.”

Why is this? Well probably, in part, everyone loves a winner, and that’s what Barack Obama is now, a really big winner who put his entire presidency on the line, and won. But there may be another reason. Namely, the media. Says the Economist:

The American people did not have clearly formed opinions on the content of this bill. They had vague opinions on the bill that were heavily influenced by the media narrative surrounding the development and legislative process of the bill’s progress.

And as anyone who has been watching cable news and/or reading much of the blogosphere knows the media narrative the last six months has been a roller coaster of Tea Parties, and nuclear options, Armageddons, 9/12 movements — in short, a whole lot of name calling. And name calling is a lot easier to talk and write, and read, and listen to than, say, the details and explanation of a thousands page long health care bill. And it was fueled in large part by some fairly strident rhetoric on the right. Hello Frankenstein?

The problem now, for the Republicans anyway, may be of the tail-wagging-dog sort. Meaning, they have for months now hooked their wagon to the anti-government train (a strategy they currently seem intent on maintaining) to the point where they have almost eclipsed any identity they have outside of that. If the country now decides that, wow, this health care bill ain’t so bad….well it may be interesting (once that reality sets in) to see the right scramble for a platform in the next six months.