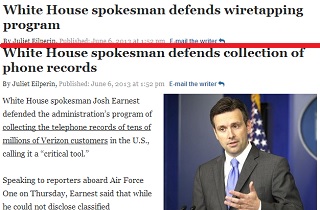 The NSA’s gathering of millions of Verizon customers’ phone records, first reported by The Guardian‘s Glenn Greenwald, has resulted in copious alarm from the news media, but at least one outlet has already begun to oversell the program. In a report on White House Principal Deputy Press Secretary Josh Earnest‘s defense of the practice, The Washington Post published a headline that said “White House spokesman defends wiretapping program,” which they later changed to the more accurate, less sexy “White House spokesman defends collection of phone records.”

Rather than note the specific change, both versions of the article were appended with the notation “This post has been updated.” An error of that significance should have been accompanied by a full correction.

This kind of scandal-fluffing has become all too common in the nascent Scandalabra™ era. Not long ago, a member of the Morning Joe crew accused the Justice Department of “eavesdropping” on Associated Press reporters, when the DOJ is actually alleged to have seized phone records of those reporters. That error was never corrected.

Mere minutes after the story of IRS agents targeting conservative groups’ applications for tax exempt status with extra scrutiny, ABC News reporter Terry Moran tweeted that the story, which to this day has not been remotely connected to the Obama administration, was “A truly Nixonian abuse of power by the Obama administration,” a statement which neither Moran, nor ABC News, ever retracted.

These stories are all alarming, to varying degrees, on their own merits, and there is no shortage of partisan political actors to exaggerate and/or downplay them. Journalists ought to stick to the facts.

At the top of his press gaggle aboard Air Force One, en route to Charlotte, North Carolina, Principal Deputy Press Secretary Josh Earnest read the following statement regarding the Verizon story (via email from The White House):

“I know there’s at least one story that all of you may be interested in: the reports overnight about a purported order from a FISA judge as reported. So why don’t I read a statement at the top just to give you a sense about where we are on this, and then I’m happy to answer your follow-up questions after that. So if you’ll bear with me, we’ll do this.

“It won’t surprise you to hear that I’m not in a position to discuss specific classified or operational issues. But what I can explain to you are our policies. The Patriot Act was signed into law in October of 2001, and included authority to compel production of business records and other tangible details with the approval of a FISA Court. This provision has subsequently been reauthorized over the course of two different administrations — in 2006 and in 2011.

“The Obama administration has made public that some orders issued by the FISA Court, under Section 215 of the Patriot Act, have been used to support important and highly sensitive intelligence collection operations on which members of Congress have been fully and repeatedly briefed. And I think you’ve heard a couple of members of Congress in both parties today acknowledge that fact.

“There is a robust legal regime in place governing all activities conducted pursuant to the Federal Intelligence Surveillance Act. That regime has been briefed to and approved by the court. And activities authorized under the Act are subject to strict controls and procedures under oversight of the Department of Justice, the Office of the Director of National Intelligence, and the FISA Court to ensure that they comply with the Constitution and the laws of the United States, and appropriately protect privacy and civil liberties.

“The order reprinted overnight does not allow the government to listen in on anyone’s telephone calls. The information acquired does not include the content of any communications or the name of any subscriber. It relates exclusively to call details, such as a telephone number or the length of a telephone call.

“The information of the sort described in the article has been a critical tool in protecting the nation from terror threats as it allows counterterrorism personnel to discover whether known or suspected terrorists have been in contact with other persons who may be engaged in terrorist activities, particularly people located inside the United States.

“My final point here: The president welcomes a discussion of the tradeoffs between security and civil liberties. Many of you covered his speech at the National Defense University just a couple of weeks ago. In that speech, the president said, “In the years to come, we will have to keep working hard to strike the appropriate balance between our need for security and preserving those freedoms that make us who we are. That means reviewing the authorities of law enforcement so we can intercept new types of communication, but also build in privacy protections to prevent abuse.”