Washington Post: Neither Obama Nor Society Should Define His Race 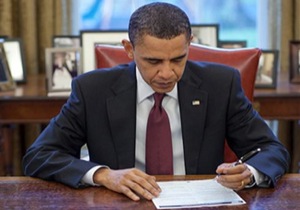 The Washington Post’s Elizabeth Chang is concerned that Barack Obama has let society define him. With his recent declaration of race as exclusively African-American on his US Census form, Chang believes the President is reacting to how society perceives him, though she also highlights the importance of racial “accuracy” on official forms. Which begs the question: with as fluid a concept as race, who defines accuracy if not social convention?

Her concerns stem from a comment the President made while filling out his form that he is African-American because “that is how I am treated,” rather than because of who he is. She believes this is a sign that he is misrepresenting himself to adhere to social pressures: “If the most powerful person in this country says that because society thinks he looks black, he is black, it sends a message that biracial children have to identify with the side they most resemble.” In the same breath, however, she argues that it is as much an issue of racial accuracy as one of defying social pressures:

“Aren’t people supposed to fill out their census forms accurately? Why else are we doing it? If everyone put down on the form how they ‘identified,’ I don’t know what kind of count we’d wind up with, but clearly it would not reflect the racial makeup of the United States.”

But by trying to enforce accuracy in the way the President defines himself, she is applying as much social pressure as anyone who has “treated” the President as black in the past. Obama’s case makes it more difficult to point out why her argument for him being biracial is equally pressuring and arbitrary, especially in light of the fact that she is pushing her notion of race as “almost useless” on the President, as well. Achieving a fairly universally recognized definition of racial accuracy with him, given the background of his parents, is easy: his mother was white; his father, black; he is biracial.

However, those lines are not so clearly cut with many others in the country– for example, those of Latin American backgrounds where generations of unrecorded miscegenation have made it nearly impossible to determine the racial makeup of a family. The Census does not identify “Latin American” as a race, but an ethnicity, so is it disingenuous for a person of that ethnic background to check “African American” if they have a suspicion of said background with little physical evidence? And what to do about people like Paula Abdul, where the term “biracial” only accounts for about a fourth of their identities?

The lines are simply too blurred to defend a universal metric for racial accuracy, so the forces of society become arbiters by default. While it would be enforced by the government, since the Census is under their jurisdiction, there is no clear scientific way to determine race, and the billions of dollars it would take to trace the background of every individual’s family is probably not worth the effort.

Chang concludes: “if we let society determine what we are, we will never change society.” She is absolutely right. But by involving herself in the racial and ethnic self-identification of another America, she is doing the work of society by determining the identity of another at a time in history when this form of identity in our country is especially elusive.