U.S. Soldiers In Afghanistan Are A Little Embarrassed By Lady Gaga Video 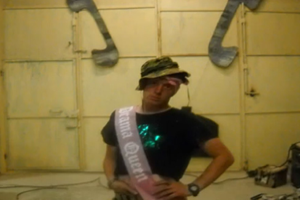 The Afghanistan remake of Lady Gaga‘s “Telephone” video that went viral yesterday and sparked a million Don’t Ask Don’t Tell jokes was meant to be an inside joke among a few friends. This the latest from reputable mug shot website The Smoking Gun, which caught up with the video’s director, Aaron Melcher (below), who refused to answer questions other than making it clear no one involved in the video wants it to continue rolling in the news cycle.

The Smoking Gun notes that their attempts to talk to Melcher, the soldier clad in Gaga-esque yellow police tape, failed, other than his admission that the video was never intended for public consumption and a clear request that “nobody in the video would like any further media coverage.” The Smoking Gun then follows this report with seven more pages of media coverage, including unsourced photos of the soldiers in their regular gear contrasted with still shots from the video, including some Facebook statements that contradict the request:

When he first uploaded “Telephone: The Afghanistan Re-make,” Melcher told Facebook friends to “feel free to share it with the world.” He added, “it’s the hotness.” Melcher and several of his fellow soldiers have carefully monitored the spiraling number of views their video has received. On Wednesday, [fellow solider Joshua] Pilon posted a brief update on his Facebook wall: “5,000 views…I’m going to be Famous!!!” In a post on his Facebook page, [James] Conley wrote of the video, “this is what people do with they free time in Afghanistan. Its crazy out here. And yeah im in it too.”

Sounds like making a transcontinental Youtube hit was all fun and games until the Lamestream Media had to go and make fun of them, although it seems the work has been met with almost universal praise. It’s pretty easy to see why they would be a little bashful about it, but creating a fun-filled work of art in your spare time when your day job is fighting in Afghanistan is an impressive and newsworthy feat. And in case you missed it, here’s the work in question below: