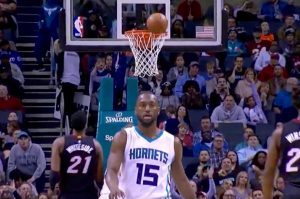 In some sports, premature celebrations aren’t uncommon. Like baseball, for instance — where a player can crush a ball, think it’s a homer, and take a few seconds to admire their shot cadillac their way over to first, only to find that the wind kept the ball in the yard.

In basketball, though, it’s different. Seldom do players have the time to celebrate a basket prematurely, as the ball gets from their hands to the hoop by the time they’ve finished their follow through.

But late in the fourth quarter of Thursday night’s game against Miami, Charlotte Hornets guard Kemba Walker managed to pull off the too-early victory dance in hilarious fashion.

Walker launched a 3-pointer from just past the top of the key. It bounced straight up off the front rim, and it appeared as though it was going to drop straight in. At least, that’s what Walker thought. So he turned away and began to do a celebratory dance.

when the three little text bubbles come up for a second but then they disappear https://t.co/d0uyaLOlJL

When you fire off a joke into the group text and then nobody finds it funny https://t.co/JMEVSFxRdY

When your candidate won the popular vote… https://t.co/27Okwn2iik