WATCH: Married Congressman Caught on Camera Making Out with Staffer 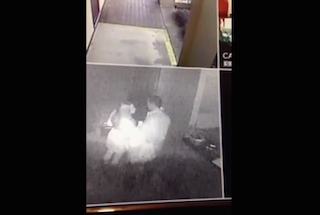 Rep. Vance McAllister (R-LA) has been in Congress for less than six months and he already has a sex scandal on his hands. The self-described Christian conservative was caught on a security camera in his own office kissing one his Congressional staffers. The video, which was taken on December 23rd, 2013, was first posted online by The Ouachita Citizen.

The Louisiana paper identified the women in the video as 33-year-old Melissa Anne Hixon Peacock, McAllister’s district scheduler. The 40-year-old congressman is married and has five children.

In a statement on the matter, McAllister said:

From day one, I’ve always tried to be an honest man. I ran for congress to make a difference and not to just be another politician. I don’t want to make a political statement on this, I would just simply like to say that I’m very sorry for what I’ve done. While I realize I serve the public, I would appreciate the privacy given to my children as we get through this.”

Watch video below, via The Ouachita Citizen:

Among the conservatives who endorses McAllister in his 2013 special runoff election for the seat vacated by fellow Republican Rodney Alexander was Duck Dynasty star Willie Robertson, who cut the ad below for the candidate. It was also McAllister who was responsible for inviting Robertson to this year’s State of the Union address.