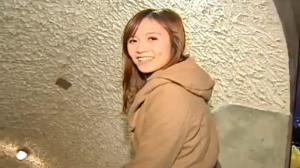 Covering the news isn’t all burglaries and gun shots and cats stuck in trees. Sometimes, reporters get to do fun, different sorts of things, like throw themselves down terrifying hell tunnels into a silent — waiting — abyss.

Such is the case for this reporter. While offering viewers a glimpse into the basement of Taipei’s Grand Hotel, she decided to showcase the hotel’s underground slide, hidden away behind a trompe l’oeil door.

RELATED: Reporter Attempts To Say That There’s Snow On The ‘Asphalt,’ Says…Something Else

What looks like a fun little ride turns out to be a one-way ticket to whatever writhing mass of hair and teeth lies waiting at the bottom of darkest R’lyeh. Judging from her screams, at any rate.

Why does the hotel even have a slide, save for tossing ill-behaved children or curious reporters down as monster chow? Wikipedia explains:

Ever since the opening of the hotel, rumour had it that secret passages ran from the hotel to the nearby Shilin Official Residence and further Presidential Office Building for Chiang’s convenience. The truth was uncovered after the 1995 fire, as part of the safety commission that was conducted. The secret passages were revealed to be two air-raid tunnels, each of them 180m in length leading to nearby parks, not to the presidential residence or the emergency headquarters as rumours had suggested. The western passage is equipped with a slide for the disabled as an alternative to the spiraling stairs. The exits are obscured with concrete walls, thus escaping public detection for decades. The tunnels have a maximum capacity of about 10,000 people.

Watch, and be warned: