We Keep Finding Historically Significant Photos. Will Our Grandchildren?

We Keep Finding Historically Significant Photos. Will Our Grandchildren? 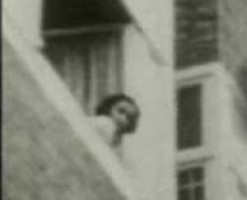 On July 22, 1941, a young girl watches from the window of her parent’s apartment as her neighbors – he in a top hat, she clutching a bouquet – leave for their honeymoon. The video was shot, of course, to capture a special moment in the lives of the neighbors. But it is significant now because of that little girl – Anne Frank, about a year before her family went into hiding.

(Credit for publicizing the video goes to Boing Boing.)

I need a standard disclaimer for these columns, something like: the study of history will be aided incalculably by the widely distributed contributions of millions of disparate photos, videos and documents – though a system to comb through and index those contributions is sorely needed. (See posts passim.)

That disclaimer holds especially true here. The entrancingly simple Anne Frank video is one of several revelatory discoveries in just the past few years, ranging from incidental documentation of the not-yet important to nearly lost items capturing people at significant moments in history. Within the past few years, for example, the Internet, dredging through the silt of the world, has uncovered each of the following:

A previously unknown photo of Abraham Lincoln arriving to give the Gettysburg Address.

For years, a photo of the crowd at the Gettyburg Address stagnated at the Library of Congress’ website, until an amateur Civil War historian stumbled across it and noticed a minute detail – what appeared to be a bearded man, wearing a stovepipe hat, arriving on horseback. The image above doesn’t provide as much detail as this slideshow zooming in on the scene, but the idea that one of only two photos of Lincoln on that day may have been discovered by the fortuitous combination of available historical documents and an interested observer speaks volumes.

From the Telegraph’s write-up of this discovery:

A set of photographs showing the private side of Adolf Hitler have been published for the first time. The colour pictures come from the collection of Hugo Jaeger, Hitler’s personal photographer, who captured him on camera him from 1936 to the final days of his rule in 1945. Jaeger hid thousands of transparencies in a leather suitcase at the end of the war. The case was found by six US soldiers as they searched a house near Munich where he was staying but they were more interested in a bottle of cognac he had also slipped inside.

Two of the most interesting recent discoveries surround the 26th President of the United States.

First, recordings of his voice, captured through Thomas Edison’s wax cylinder system in 1919 and put online by UC Santa Barbara. Roosevelt’s voice is somewhat nasally, a bit high-pitched – but impressively articulate and accented as one might expect of an upper class, turn-of-the-century New Yorker. These are not the earliest examples of his voice, to be sure – but the vintage and recording method of these speeches is remarkable.

Perhaps the most stunning discovery, though, is this photo, taken during Abraham Lincoln’s funeral procession through New York in 1865.

The boxed window shows the apartment of Roosevelt’s grandfather, Cornelius, near New York’s Union Square. The two tiny faces (which you can see better here) are supposedly Teddy and his brother Elliott (Eleanor Roosevelt’s father). The idea that a seven year-old future President was captured observing Lincoln’s 1865 funeral is stunning – and knocks the famous Clinton-Kennedy photo down a peg or two.

For historians, amateur and otherwise, these are exciting discoveries – and the future offers many more of similar provenance. Maybe.

The Anne Frank video was saved purely by chance. According to CNN, the honeymooning couple gave the footage to Frank’s father after the war, understanding how much he’d lost. It survived sixty intervening years, in remarkable quality – but that someone in 1941 had access to a personal camera to document important life moments was an exception itself.

Now, of course, everyone has a camera, video and still, and captures the world around for moments of far less significance. Every day, future leaders, Presidents, criminals, geniuses and inventors are being photographed and videotaped. But with this surfeit of recordings, many now deemed useless will be lost.

There’s another problem, one raised by the always-thoughtful (and polarizing) Internet guru Dave Winer following the recent death of his father. What happens, he asks, when the owner of content dies? How can his media last forever? Where is the company providing eternal online hosting?

Imagine if there were an easy way for digital media to be preserved indefinitely for nearly no cost. What gems might future hobbyists and historians uncover, digging through an infinitely large pile of images at a point when they become publicly available? Especially if the tagging systems of social networks like Facebook travel along with them?

The Second Dark Ages (that of pre-Internet information gathering) has come to an end. We’re discovering, every day, works of cultural art from a time before the possibility of cataloguing existed. We’ve yet to build a system to allow such discoveries more easily in the future – but it will come.

The picture you take on your iPhone today may be of the next Roosevelt or Lincoln – or, God forbid, the next Frank or Hitler. But we’ll only know if that picture can be re-considered in 100 years.