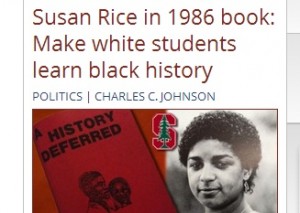 If the attacks against U.S. Ambassador to the United Nations Susan Rice‘s intellect and temperament have been so subtle as to obscure their illegitimacy from the minds of some media and political figures, The Daily Caller rode to the rescue Thursday with a “scoop” about Dr. Rice’s collegiate effort to afrocate your children. Reporter Charles Johnson (not that Charles Johnson) took great pains to skirt the line of overt racism, and maintain deniability of the message his audience was hearing loud and clear, but the editors blew it for him, leaving what I believe is overt racism in the worst possible place.

Johnson’s article details a book, by then-college student Susan Rice, that talks about the importance of teaching black history in American schools. In any other publication, the body of this piece might seem relatively innocuous, or at most, somewhat insensitive, but The Daily Caller‘s fascination with the doings of the dozens-strong New Black Panther Party, or chronicling the tardiness of black leaders, adds an unmistakable contextual filter. Johnson avoids any overt commentary, but given his audience, the piece is akin to reading an ingredient list for Twinkies in the fair trade aisle of Whole Foods.

Central to the book’s ambition was reclaiming lost black achievements and giving black children pride in their history. In that vein, Rice lists black achievements in “Literature,” “the Arts,” “the Music [sic]” and “Public Service” to present an Afrocentric view of U.S. history.

This was necessary, Rice noted in her book’s foreword, because most students were “taught American history, literature, art, drama, and music largely from a white, western European perspective. As a result, their grasp of the truth, of reality, is tainted by a myopia of sorts.”

…Despite lacking an Afrocentric curriculum at the tony National Cathedral School for Girls in Washington, D.C., Rice’s options were many and impressive.

Her father was a governor of the Federal Reserve and a World Bank official, and her mother was a senior vice president of Control Data Processing. Rice won a coveted Rhodes Scholarship in December 1985. “I think it is very important for other black students to be aware of the scholarship program and see it as a good opportunity for them,” she told The Washington Post at the time.

The scare-quotes around black “Literature,” the passive/aggressive inclusion of the “the Music” error, and the microscopic commentary on Rice’s “tony,” black-studies-free school days, were all fairly subtle, and a completely unaware, non-racist visitor to The Daily Caller might not have noticed any of them, or gotten the message of the piece at all, and the author could have done a shrugging “What, me racist?” pose while accusing everyone else of being racist, except that Johnson and/or his editors shined a great big pillowcase-white light on the whole thing with their headline:

Take a look through Johnson’s article, and through all of the quotes he pulls from the book. There’s not a single mention of white students. According to the article, Rice wanted black history to be taught to all students, and discussed the specific benefits to black students, yet the big scoop, the story’s hook, is that Susan Rice wanted to make white student learn black history, she wanted to force her afrocation specifically onto precious, innocent white students.

You almost got away with it, Daily Caller, but unlike the hapless tricksters in a Scooby Doo cartoon, you’ve unmasked yourselves, and everybody can see you.