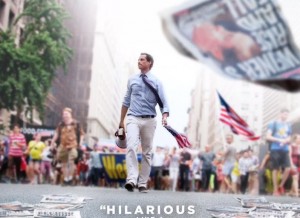 Opening this weekend in select theaters across the country is a fascinating portrayal of Anthony Weiner’s second fall from grace. It’s not far-fetched to suggest that Weiner will eventually be compared to other great behind-the-scenes and political documentaries like The War Room, A Perfect Candidate and Fog of War.

Unlike those films, however, Weiner is set amid the hyper-speed and pervasive digital media world of which we all trying to make sense. More importantly, the movie examines the political creature that thrives in this very climate, only to ultimately, and quite publicly, fail. As Weiner explains toward the end of the film, the inherent characteristics that made him a successful political figure were the very same qualities that led to his downfalls. Yes, “downfalls” is plural, and that’s where the movie takes off.

The movie opens with the former (and disgraced) congressman optimistically announcing his run for Mayor of New York, with wife (and Hillary Clinton’s closest confidant) Huma Abedin at his side. Weiner’s past transgressions are finally behind him — dramatic music cue — and his wife appears to have not only forgiven him, but is in full support this new chapter in their lives. This mayoral campaign is Weiner’s ticket back into positive public favor after his first scandal, a new episode for the happy and politically ambitious couple to do what they do best. Oh, you don’t recall the first scandal from which they are trying to get free? You missed the very embarrassing public tweets he accidentally published, quickly deleted, then lied about in a very public manner? The scandal that led to his resignation from Congress? Yeah, that one.

Spoiler alert: Weiner does NOT get elected as mayor of New York, despite leading in the polls just a few short months out from the Democratic primary. What went wrong, you ask? As the film depicts in a painful, warts-and-all manner, more digital indiscretions between Weiner and various women are inevitably revealed, which once again raises reasonable questions about the candidate’s judgment, self-discipline and possible perversions. Throughout the new scandal, Weiner remains remarkably, shockingly calm, maintaining a world-class wit as his professional — and to some extent, personal — worlds collapse around him.

There is a ton to unpack in this film, but there is one scene in particular that has not only stayed with me, but also inspired me to contribute my first column to Mediaite in over four years. It’s a scene that starts with Weiner appearing on MSNBC’s The Last Word with Lawrence O’Donnell program in the waning days of his failed mayoral bid.

O’Donnell — who is conveniently ensconced in the NBC News’ Washington, DC studio for this interview — opens with a berating “What is wrong with you?” It’s a fascinating moment to watch unfold in real time, rife with cognitive dissonance for the viewer. Yes, we are pretty much thinking the same exact thing that O’Donnell asked, but we can’t also help but feel some measure of empathy for Weiner.

While Weiner punches back at his interviewer, it’s a cringe-worthy scene in which no one wins. O’Donnell comes off as a dunderheaded schoolyard bully who doesn’t know when to quit, and Weiner comes off as feisty guest, full of chutzpah, yet sadly delusional enough to believe that this is anything but a publicity nightmare for him in the viral video age. Watching it from the vantage of the ambushee, you can’t help but feel the sort of sympathy you feel when you see an unsuspecting and limping gazelle come across a pack of lions. What follows is tough to watch, but at the same time, no one can not watch either. In other words, it’s great cable news programming.

But the most telling moment of the whole damn movie comes the day after this train wreck of an interview: We find Weiner sitting in front of what appears to be his office desktop computer, watching the previous night’s prime time tete-a-tete on good old Mediaite.com with delusional glee, seemingly unaware of how embarrassing this whole episode has been to himself and his family. It could only have been worse if Mr. Weiner were openly pleasuring himself while watching, but even as it stands the scene is no less masturbatory. Huma ultimately enters the scene and challenges her troubled husband, who is seemingly addicted to watching himself online. It’s at that exact moment that Weiner reveals a complete lack of self-awareness. He doesn’t care that he looked foolish and was embarrassed. It appears that Weiner only truly cared that he created compelling content on live TV by pushing back at O’Donnell.

The scene recalls an impossibly insightful comment made by Dana Carvey (of all people) from an old MTV clip showed that aired roughly 15 years ago. The show was focused on both the upsides and trappings of fame, and the comic character actor compares the weird effect of being on television to a televised piece of fruit. Carvey posited that, “if you put a grapefruit on TV every day for a week, then put it on display at the local mall, people will walk by, point and say, ‘That’s the grapefruit that was on TV.’” In this instance, Anthony Weiner is both the grapefruit and the slack-jawed fan staring at himself on a Mediaite video player.

Weiner is a post-modern retelling of the story of Narcissus, and it’s a splendid metaphor for the current state of media in general, especially cable news. You know the myth of Narcissus, the handsome hunter who fell in love with his own reflection, only to commit suicide after learning that his love could not be reciprocated. That’s not only the story of Anthony Weiner. It’s the story of how our digital and cable news industrial complex is creating narcissistic fools who only fall in love with their own image, and would rather say or do anything to get media attention, quality of content be damned.

For anyone remotely interested in the intersection of media, politics and publicity, this movie is a terrific way to spend an hour and 40 minutes. First-time feature documentary directors Josh Kriegman and Elyse Steinberg pulled off the impossible: they captured a blow-by-blow public melt-down on the political sausage factory floor that somehow also serves as a love letter to the neurotic cultural mosaic that is New York city. (Sausage factory…heh.)

Although the filmmakers’ access to the troubled candidate came as a result of Steinberg’s previous stint as Weiner’s chief of staff, this is not a fawning depiction. In fact, when filmmaker asks his subject at the end of the film “Why did you let us film this,” he asks with the same incredulous thought bubble shared by viewers watching the film. I won’t reveal the answer, but suffice to say that Weiner’s response suggests that he’d rather be part of the media narrative (in the hope that he can own it) than remain a punchline.

Alas, he still comes out looking like the fool.

View the trailer below: