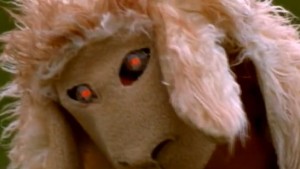 Update: Both campaigns react to the Demon Sheep uproar, after the jump.
The Carly for California campaign has created an ad so weird, it would make Salvador Dali say “WTF?” It’s a negative attack aimed at Carly Fiorina‘s opponent, Tom Campbell, but if there’s any justice, it will now become the political equivalent of Star Wars Kid, or those “Hitler reacts” videos.

It’s not only strange, but it seems to be counter-productive. In the ad, Fiorina seems to be saying that voting for lambs is good, but for my money, I’ll vote for the guy dressed as a lamb who can shoot death rays from his eyes, even if he does seem to be eating poo at one point.

Who wants to vote for a lamb? Seriously, is Fiorina going for the Clarice Starling vote?

Even if you grant that this was some kind of creative misfire, what is the purpose of obscuring Fiorina at the end of the commercial? Is she in witness protection? Is she being forced to exploit CTU’s computers for her convict ex-boyfriend? Is she Keyser Soze?

“The response to our web video exposing Tom Campbell’s support for tax increases and bigger government has been exactly as intended – it’s intentionally edgy and controversial to get people talking and watching. And that’s exactly what has happened and we couldn’t be more pleased.”

I also emailed Tom Campbell’s campaign for their reaction to the Demon Sheep ad, and here’s what their spokesman told me:

This bizarre video is just the latest sign that the Fiorina campaign is in complete meltdown mode. Tom Campbell will stick to talking about how to rein in federal spending. We’re happy to let Carly Fiorina talk to California voters about demon sheep.

I thinkwhichever candidate can get Demon Sheep to go on the stump will run away with this one.