What About When The President Is Republican? Why Liberals Shouldn’t Dismiss The DOJ And IRS Scandals

What About When The President Is Republican? Why Liberals Shouldn’t Dismiss The DOJ And IRS Scandals 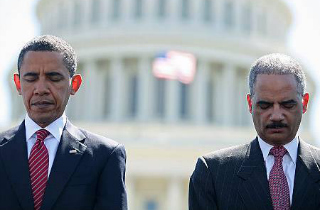 While many liberals and progressives have come around to condemning the government’s actions in these recent Internal Revenue Service and Justice Department scandals, there seem to be a large swath of those dismissing the problems as part of the conservative imagination, effectively denying any systemic issues not only within the Obama presidency but within bloated government itself.

For every liberal commentator who has slammed the agencies for breach of trust and misconduct, there are plenty running cover for the administration by shrugging off the issues and chalking them up to media hype. That’s expected. And look, you may not find the recent IRS and DOJ stories “scandalous” — that’s fine. But CNN’s well-respected reporter Jake Tapper raises an excellent point you should consider: This misconduct and abuse sets a precedent for the next administration to expand upon. And what, then, if a Republican is next in office?

As we learned during the Bush years, Republicans are just as capable as the Democrats of engaging in executive overreach, bureaucratic abuse, and general incompetence. Only blind partisans think one party is the only party of bad behavior. And now that the Obama administration has continued (and often expanded upon) the precedents set by others, what’s to stop the next president — potentially a Republican — from continuing the trend?

In his book Crisis and Leviathan, economist Bob Higgs used the term “ratchet effect” to describe how the size and scope of government grows in spurts, typically during “crises,” and then never reverses course, regardless of how well-intentioned subsequent politicians may contend to be.

So even if the next president is determined not to repeat the same mistakes of this presidency, there will inevitably be other scandals of a similar nature. A common defense of this administration has been that “the higher-ups had no idea,” but that’s the main problem: An ever-expanding bureaucracy is one that inherently becomes unmanageable. This should worry progressives.

And it will happen again. Unless partisans on both sides agree to restrain the power of the Internal Revenue Service, drastically reform the tax code, and perhaps get rid of these 501(c)(4) laws that are easily open to selective enforcement abuse by whoever’s in power at the time.

In the case of the Justice Department secretly obtaining private phone records from the Associated Press and Fox reporter James Rosen, rather than defend the administration’s “right” to pursue its whistleblowers (however selective their pursuit has been), progressives should recognize the dangerous precedent set by this ordeal.

The DOJ’s powers to secretly obtain private records are already dangerously broad; a product of the post-9/11 expansion of executive power the Bush administration so readily ushered in. And Obama has done little-to-nothing in the way of rolling back those expansions — in fact, his administration has injected steroids into some of those ugly Bush-era policies.

So when the next president takes office, it likely won’t be another AP snooping case; but it’s a guarantee someone else will be subjected to the sweeping powers being broadened by administration after administration. Dismissing the DOJ scandals effectively means being okay with the next president doing something similar, even if it’s a liberal press outlet that is at the tail end of an overreaching investigation by Republicans.

These expansive powers aren’t going away if you pretend they don’t exist. And you can bet a hawkish Republican administration will abuse their ability to snoop as much as this administration has. Rather than wave away the problem, it’s time to admit wrongdoing and keep a tighter rein on government.

Yes, many of the conservatives now up in arms over the administration’s “war” on whistleblowers/reporters were the same ones screaming at journalists to “shut up” during the Bush years. They are also the same ones who cheered on the expansion of powers under the PATRIOT Act, etc.

But don’t dismiss the scandals simply because of the partisan opportunism of some. By coming around now, those folks automatically set a higher standard for themselves in the future. And progressives should try and do the same here.