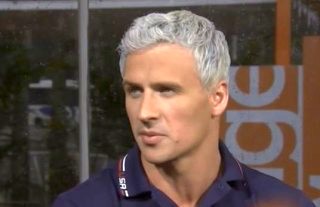 Ryan Lochte is a dope and liar who, if the world was universally just, deserves every bit of criticism and of the consequences which are coming his way for the inaccurate story he told at the Olympics a week ago. However, in my view, there is also little doubt that, had the circumstances been only slightly different, the news media would have given him a pass, or maybe even made him into some sort of hero. The selective outrage over Lochte’s lies tells us a lot about how the news media works (or, often, doesn’t) in these situations and how they decide who gets destroyed and who does not.

To be very clear, what Lochte did warrants condemnation. What happened at that Rio gas station, as he has belatedly admitted, was started by him. His dramatic distortion of the story caused a lot of damage for which he is solely responsible. He put his teammates in a horrendous position not of their making and damaged the reputation of the city of Rio and this Olympic Games. As a price for all of this, he has been tortured in the news media and his swimming, media and endorsement career are all, very likely, effectively over.

With all of that said, you can make a very strong argument that Lochte has been mistreated by the news media in comparison to how they likely would have reacted had this situation been even slightly different. If the news media vilified everyone who lied (especially those who are Democrats in, or who are seeking, high office) the same way, I would have no problem with it and the world would be a much better place. But this rather arbitrary enforcement of these nebulous rules which dictate how the news media reacts to a story is what I find bothersome and worthy of some exploration.

It is important to point out that, while Lochte obviously told a story which included clear lies and gave a vastly different impression than what was actually true, there was indeed some significant veracity to his tale. It is clear that Lochte was indeed told to hand over money (apparently for the damage he caused) while having a gun pointed at him. I’m sorry, but when you are drunk, late at night, and in a foreign country with a seedy reputation, it is certainly possible to misinterpret that as an “armed robbery,” when it was really more of an “extortion,” as Lochte is now referring to it.

The key moment in this all going wrong from a media perspective was when Lochte spoke to NBC’s Billy Bush the next day, apparently while still at least somewhat intoxicated. It is important to point out that Bush has had a very playful relationship with Lochte going back to the last Olympics and has been integral in creating the narrative about Lochte that he is a fun-loving party boy with a crazy lifestyle.

It seems to me that when Lochte did that interview with Bush he stupidly thought he was talking to a buddy of his and was bragging about the wild night he just had. In his (rather simple) mind, taking liberties with the facts of a story to make it more interesting while eliminating the parts about his own culpability is just what you do when you are speaking “bro, to bro.” At that point, once Lochte completely sobered up, he was locked into a nonsensical story and in way over his head.

Lochte was also completely oblivious to the reality of how incredibly vulnerable he was to a media search and destroy mission due to an almost “Perfect Storm” of circumstances.

When a story like this breaks, the media has several considerations it uses in determining how big of a deal to make of it (the truth and actual significance of the story are rarely deemed top priorities any more). The first and most significant factor is the nature of the profile of the person at the center of the story. Here, like dry California brush during a wildfire, Lochte could literally not have been more susceptible to the media flame.

First, he is a borderline “celebrity,” but not nearly an icon. Most people have heard of him which makes the story an easy sell (had one of the other anonymous swimmers there that night done this, the media wouldn’t be interested). They have no particular love for him and there was no huge viewer fan base to offend by attacking him. He is also not nearly such a big star that the news media loses anything by taking him out of orbit (had Michael Phelps been involved in exactly the same story, the media equation would have been vastly different, especially for NBC, which is heavily invested in the entire Olympic movement).

Second, Lochte is 32 years old and, while he has hinted he would try to return for one more Olympics, the chance of that actually happening in a significant way were already remote. This means that he has no value to the news media (or NBC specifically) in the future, a fact exacerbated by the well-known reality that his lack of intellect means there will be no fame/relevance after swimming for him. To the news media, Lochte was effectively a “lame duck” providing a free and easy shot.

Third, Lochte has no “political correctness protection.” He is a white male with no hardship story, hair that was dyed “blueish,” and a failed reality TV show history. Had he been a minority or a woman, I am quite sure that the news media would have cited the presence of a gun being pointed at him as more than enough cause to benignly report the story, claim mitigating circumstances facilitated his lies, and quickly move on. The sports world is littered with figures (sometimes minorities) who have committed far worse transgressions and have been allowed to still thrive with almost no media blowback.

Finally, the timing could not have been worse for him. Let’s say that Lochte and his buddies had done this tonight after the closing ceremonies. By tomorrow the world’s media is gone and NBC is no longer devoting massive hours to the coverage of everything related to the Olympics. It would be, at best, a minor story which would be quickly forgotten and a tiny footnote to the games. Matt Lauer would not be doing highly-publicized interviews and weather-guy Al Roker would not be creating viral videos by calling him an obvious liar.

Again, as someone who abhors liars and who thinks that our news media is doing an awful job of keeping our leaders accountable, I find myself in the weird position of seemingly “defending” Lochte. But that is not what I am doing.

What bothers me about all of this is that out of all of the truly outrageous and really impactful public scandals which the news media routinely botch or ignore because they don’t fit a ratings or political agenda, it seems comical that THIS is the scandal that the news media decides we REALLY need to get to the bottom of. If that was also the case with far more important stories, I would have zero issue with it. However, this whole fiasco seems like a classic case of the news media suddenly doing their job in a way that actually exposes how and why they so rarely do so when it really matters.