Where Does Local News Fit If National And Social Media Take Up All Your Time? 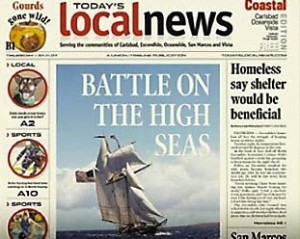 Most cities don’t have a President who gets into debates on policy with foreign leaders; they don’t have internationally recognized music stars; they don’t create fascinating innovative tech companies. Most cities potter along, debating the police department budget or the addition to the zoo or an increase in auto thefts.

Most cities, in other words, are boring.

Once upon a time, there were two main ways that people learned about what was happening in the world: newspapers and the six o’clock news. Each had a limited amount of space which was divvied between local and non-local news. In the paper, the division generally occurred between sections. On TV, it was half-hour chunks. You got your news, and you liked it.

Now, of course, people can get any information they want on anything at any time. They can follow a thousand different Twitter accounts and have five hundred Facebook friends and Flipbook their way to the things that interest them. The odds that the City Council’s negotiations on a sewer contract makes the cut are small.

Which is why it’s unsurprising that a comScore report commissioned by the FCC found a “surprisingly small audience for local news traffic.” As ably summarized by the Nieman Journalism Lab:

Here are some takeouts on local news traffic itself (bearing in mind that each market features an average of ten different options for online local news):

No system for engaging a local audience has been proven to work, but many have been tried. Patch, AOL’s broadly distributed local news system; DC’s quickly-gutted TBD experiment; the Texas Tribune. Each has a different value proposition and different toolset. None has set the world aflame.

I think I know why.

I used to run political campaigns, primarily at a local level. It may not surprise you to learn that, when there’s a Presidential election going on, it’s hard to get people engaged in a race for the state Assembly. What people want to talk about and engage in is what they read countless pieces about on the internet, or blog about themselves. They want to do volunteer work on behalf of candidates with hundred-page policy documents and daily updates from the campaign trail – and that’s what voters want to hear about. Unless, of course, it was their street that lost its stop sign or has a pothole. At that moment, the Presidency couldn’t matter less.

That’s because there are generally two things people care about: what everyone is talking about, and what’s happening to them. Local news is caught in the murky middle. For decades, they’ve tried to tie local news to national events (“The tornado in Joplin: could it happen here?!?”); the web has allowed media to move closer and closer to home. In fact, this is where Facebook and Twitter shine: your curated community sharing news that’s important to you, as an individual.

It won’t be every day that a governor swoops in to see his kid’s baseball game via helicopter; only rarely will your Congressmember type an “@” instead of a “d”. And, hopefully, you won’t regularly need a critical problem on your own street fixed.

The problem is age-old: how to get people to care about something important that is uninteresting and tangential to their lives. Our existing tools aren’t answering the question. They seem only to be making the problem more stark.