Which Candidate Will Blink More At Debates? Will It Influence Your Vote? And Does Anybody Care?

Which Candidate Will Blink More At Debates? Will It Influence Your Vote? And Does Anybody Care? 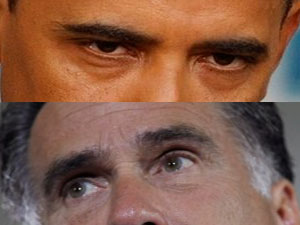 Ever since political debates have been televised, the appearance of a candidate is key. Richard Nixon infamously came off as less-than-impressive compared to the more photogenic John F. Kennedy. Tomorrow, President Obama and Mitt Romney will come together for the first of three televised debates this month, and while people who actually care about the issues will, you know, be listening to their actual positions, but for people who like to judge a politician not by what they say, but by how they look saying it, the eyes have it.

Specifically, how many times the eyes open and close. You see, The Daily came out with a story yesterday detailing a correlation between debate blinks and electoral victory.

According to the analysis of Joseph Tecce, a Boston College psychophysiologist who has spent decades studying the body language of presidential hopefuls, the candidate who blinks more during debates has lost every election but one since 1980. The lone exception was in 2000, when a faster-blinking George W. Bush bested Al Gore in the electoral college … but lost the popular vote.

Bur even the most reasonable person would say, “Correlation is not causation!” Tecce argues that humans are likely to “recognize faster blinking as a sign of distress in others.” He predicts that the “blinking contest” at the debates will be a close one, finding that during their respective convention addresses weeks ago, Romney blinked 33 times a minute while Obama blinked 41 times a minute.

However, this theory does not seem to apply to the primary races, because of some scientific, otherworldly reason we don’t have full knowledge of yet or something. In 2008, John McCain blinked a lot more than Romney, and Obama blinked a lot more than Hillary Clinton. The Daily also notes that Rick Perry blinked at a “near-reptilian rate” (their phrasing) of 16 times per minute. Apparently this was enough to warrant a comment from Perry’s former campaign manager, who gave a calmer and more reasoned response than most people would have.

“There are a lot of nonverbal cues that you practice along with practicing policy and delivery, but blinking is not in that category… And quite frankly it seems a little absurd that someone would do a study on it.”

Yes, it is. It’s certainly an interesting thought to imagine that blinking could have ANYTHING at all to do with someone’s electoral chances. But isn’t that too narrow of a subject to focus on with something as big as “let’s decide who we want as our president”?

So let’s leave the political blinking to what it’s really meant for: a sketch on Letterman.