Check Out This Awesome Rebuttal To Samuel L. Jackson’s ‘Wake The F**k Up’ Ad
video

Check Out This Awesome Rebuttal To Samuel L. Jackson’s ‘Wake The F**k Up’ Ad 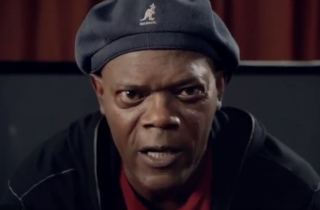 Shortly after the release of that “quasi-ad” from the liberal super-PAC Jewish Council for Education & Research, featuring a creepy Samuel L. Jackson telling various members of a family to “wake the fuck up” and get energized to vote for President Obama again, libertarian outlet Reason TV has responded with a much more accurate telling of the story — telling the acclaimed actor that he is actually the one who needs to wake up.

The JCER ad’s cutesy images of disenchanted Obama supporters in their quaint suburban home are subverted by images of drone flying overhead and bombs being dropped. “This part of Pakistan isn’t quite heaven, with drones buzzing over them 24/7,” Reason TV editor-in-chief Nick Gillespie begins the narration.

The original ad made no reference to President Obama’s controversial use of drones or to his somewhat Bush-like foreign policy in general.

“The bombs that we’re sending are not so precise. Hundreds of innocent people have died. And your chief concern is a bake sale and such?” continues Gillespie, referring to Jackson’s imploring teenage girls to go back to their Obama fundraising ways.

“Some news for you Samuel: wake the fuck up,” the parody rebuts.

“The idea that anybody would just kind of will away Obama’s record in office and the results it’s produced is something that I felt needed urgent critique,” Gillespie said of the parody’s genesis.

And so his clever spoof goes on to hit all the points that Jackson’s video conveniently overlooked — while the actor praised the president’s accomplishments and warned the family that “on schools, the environment, unions, fair pay, we’re all on our own if Romney has his way,” Gillespie’s video points out that this is a president who has used drone strikes, kept open Gitmo and continued indefinite detention, and has ordered the killing of American citizens through executive order.

“We’ve got from the promise of changing and hoping,” Gillespie rhymes, “to domestic surveillance and TSA groping.”

– RELATED: Look At All The Pretty Things The Democrats Promised In 2008 (And Failed To Deliver)

Reason scorns the actor for assuming voters are stupid because they aren’t excited for President Obama this time around, concluding: “The next time you say that us voters suck, make like Pakistanis at night and wake the fuck up.”

This is not to say that Reason is advocating for Mitt Romney. Quite the contrary. The libertarian magazine is also an outspoken critic of the Republican candidate, and does not see him or the GOP as a decidedly better on any of the issues raised above.

“One of the worst things about politics is that partisans are always forcing false choices. If you critique Obama then you’re for Romney! That’s the sort of neanderhtal Manicheanism that Bush was attacked for: Remember his statements that if you’re not with us, you’re against us?” Gillespie tells us.

“Making fun of and highlighting the banality of Obama supporters in no way signifies support for Mitt Romney,” he continues. “Our video makes fun of a great actor who also happens to be one of Barack Obama’s most deluded fans. If your takeaway from that is that Reason TV is pro-Romney, I’ve got some swampland in Florida that I want to sell you.”

Indeed, many of those policies began under George W. Bush and will likely continue under the next president, regardless of whether it’s Romney or Obama. Criticizing one does not mean the other is safe from similar scorn.