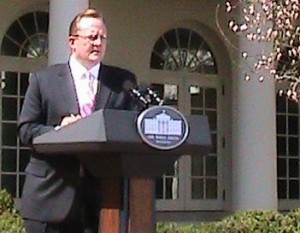 Earlier this week, in what is surely a sign of the coming Demon Sheep Apocalypse, both Michael Moore and Rush Limbaugh raised the same concern in responding to heartbreaking healthcare anecdotes.

On Countdown, Moore pointed out that the reform bill would not have helped Natoma Canfield, because the pre-existing condition rule doesn’t kick in for adults for 4 years. The following day, Countdown fill-in Lawrence O’Donnell chastised Rush Limbaugh for telling 11 year-old Marcelas Owens that his mother “would have died anyway” due to the same provision. At yesterday’s White House briefing, I asked Robert Gibbs to explain the gap to Moore and Limbaugh.

TC:    First, earlier this week — sorry, I have two questions. First, earlier this week, both Rush Limbaugh and Michael Moore pointed out that the preexisting condition provision of the legislation doesn’t take effect for another four years, and I’m wondering if you could tell us, was that a concession, and if so, who fought for that and what did they — what did you get in return?

TC: For adults, that is.

MR. GIBBS: Right. Well, again, the — as I described earlier and as the President has described, there are certain things that cannot be instituted until you have everyone in the system. Obviously this is a piece of legislation that phases in over the course of many years those changes. And as a result of that phasing in, when that’s done, preexisting conditions for adults will be outlawed. But understand this — when this becomes law, an insurance company will no longer be able to discriminate against a child that has — that they believe or says that has a preexisting condition.

TC:  Children. And so it’s pegged to the mandate then, is that fair to say?

Limbaugh and Moore, with varying degrees of humanity, deliberately missed the point of these stories, which are meant to underscore the need for the pre-existing condition provision to exist at all.

On the other hand, that 4 year gap for adults flies in the face of the bill’s compassionate aims, and it ought to be fixed. It wouldn’t be that difficult to allow people like Natoma to enroll in Medicare during that gap, and within a set enrollment period.