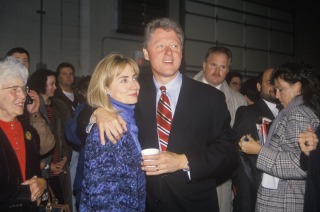 If we must dredge up Whitewater, as Michael Isikoff does on Yahoo! today, then let’s be specific instead of vague – or at least not as vague as Isikoff. The occasion for reviving the old Clinton-era pseudo-scandal is a new book by Robert Fiske, the first special prosecutor to work on that probe before a panel of right-wing judges appointed Kenneth W. Starr to replace him.

Let’s begin with the headline, which struck me as misleading, perhaps intentionally. “First Whitewater Prosecutor Says ‘Serious Crimes’ Were Uncovered In Probe” is a statement carefully crafted to suggest that the investigation revealed felonies committed by either Bill or Hillary Clinton or both. Of course, there were none. Instead, the Clintons lost money in the land deal and became the victims of crimes committed by others, notably their Whitewater business partner James McDougal and Hillary’s former law partner Webb Hubbell.

Nor is the relevant quote from Fiske: “There was never any evidence that was sufficient to link the Clintons to any of it, but there were certainly serious crimes.”

Yet that clear exoneration obviously didn’t satisfy Isikoff, who spent years pursuing the Whitewater myth as an investigative reporter for Newsweek. No doubt he would like to vindicate his Herculean effort, which produced nothing of value beyond a $50 million bill to the taxpayers, a sordid sex scandal, and a failed impeachment.

In his book, Fiske complains at length about his removal and replacement by Starr, insisting that he and his prosecutorial team would have wrapped up the investigation much sooner. But the former United States Attorney also tells Isikoff that he believed in the credibility of David Hale, the main witness against President Clinton, whose legal bills and living expenses were long subsidized by the president’s enemies as part of the “Arkansas Project.” (Although Isikoff attempts to bolster Hale, his nefarious role as the instrument of a conspiracy against the president and First Lady is thoroughly documented in The Hunting of the President: The Ten-Year Campaign To Destroy Bill and Hillary Clinton, which I co-authored with Gene Lyons.)

Starr presumably believed Hale too, or wanted to. But because Hale was a convicted felon and a known liar, there was no way to use his testimony against Clinton without corroborating evidence. And despite coercive prosecutions of other witnesses and a multi-million-dollar investigation, not a shred of further evidence ever came to light.

What Isikoff omits from this Whitewater redux is the conclusive evidence that other investigators uncovered – most notably, the exhaustive three-volume report compiled by the San Francisco law firm of Pillsbury, Madison & Sutro at the behest of the federal Resolution Trust Corporation.

Leading the law firm’s probe was Jay Stephens, a Republican lawyer whom Clinton had dismissed in 1993 as U.S. Attorney for the District of Columbia. Based on the Clintons’ sworn interrogatories, interviews with 45 other witnesses, and more than 200,000 pages of documents, the Pillsbury report found that the Clintons had told the truth in every significant detail. McDougal had deceived and cheated them. They had lost $43,000 on the deal. They had known nothing about McDougal’s fraudulent misconduct.

Journalists, pundits and propagandists obsessed with Whitewater did their best to ignore the Pillsbury findings. A year after their release, in December 1996, Isikoff co-authored an embarrassing Newsweek cover story hyping Starr as “The Most Dangerous Man In Washington,” featuring the promise of indictments “that could very possibly alter the course of Bill Clinton’s second term.” The product of another “exclusive interview” with Starr, the lengthy article included a list of alleged crimes imaginatively attributed to the Clintons and their aides by the Newsweek reporters.

Two months later, Starr – predictably unable to “deliver” an indictment against either Clinton — suddenly resigned. With the president’s re-election in November 1996, the independent counsel’s ill-concealed political purpose had reached an ignominious end.

With Hillary Clinton as a potential political target in 2016, Isikoff will keep recycling this tired material for the foreseeable future, no doubt. But this time, somebody at Yahoo! – an editor? – might require him to report all of the evidence.

– Is Karl Rove Really A Hardcore Racist — Or Is He Just Lazy?